NATHAN Roberts became the last ever winner of the Stock Car Essex Championship at Arena Essex on Bank Holiday Monday, as the countdown to the closure of the venue continues to gather pace. 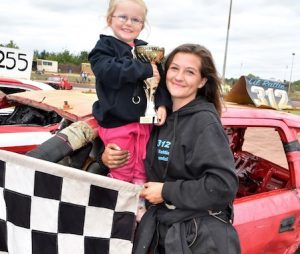 Roberts fended off a last corner attack from Alfie Jones to take a dramatic victory. Earlier Roberts had bumpered past the pole position man, but Jones remained in his wheeltracks for the entire distance, just failing to make the final bend attack work. Aaron Totham came through for third place following a tangle between Dave Palmer and Sonny Sherwood.

Tyler Scott bounced back from a head on crash at the last Stock Rod meeting, to win heat and final on this occasion. Robert Taylor was the other heat winner whilst Matt Rowling was clearly the fastest driver on track, taking to the outside line and nearly coming good in the second heat, until clashing with Joe Simmons in the final laps.

Wayne Londors just managed to hold off Jason Mills for the win in the Lightning Rod final, the pair comfortably clear of Chris Reeve, who managed to hold off the star drivers. Reeve’s luck finally turned around at this meeting with a heat win, despite an apparently ill handling car, meanwhile son Marcus was the other heat winner.

A lively pair of Banger heats saw wins for Jack Coveney and Tom Greenstreet whilst Danny Mitchell crashed the car of Terry Smith before getting destroyed by Jamie Nelson. Mitchell still managed another couple of laps before finishing himself off with another hit to Smith. Kyle Roberts crashed on the pit bend and whilst trying to reverse to safety he took a hit and a big T-Bone from Coveney.

The final was a little quieter with Cray Ingram taking the win before depositing Jodie Cheeseman into the fence. Cheeseman however was to bounce back with another Destruction Derby win, this time her car earning her a third successive trophy by refusing to give up despite crashes from Micky Cornish and Luke Hardy. Dean Skull took heavy damage from Jason Barrow, Barrow then planting the car of Luke Hardy into the Skull wreck a lap later.

The next action at Arena Essex is on September 9th when the PRI Bangers are joined by the 2L Stock Cars, Lightning Rods and Junior Ministox as the countdown to closure in November continues.