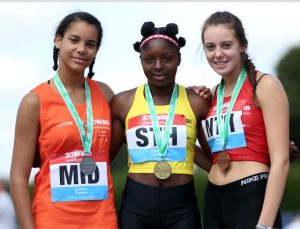 The William Edwards pupil was part of the England South team and performed well, a leap of 5.98m in the final round securing her gold.

Of her performance, Funminiyi said: “I’m really happy about my performance. The School Games has been a really good experience -, I’ve been to watch hockey and I found it really interesting because I’m not very good [at hockey] myself!

Now in its thirteenth year, the event – featuring over 1,000 school-age athletes – will see some of the most talented schoolchildren from across the UK compete in 11 different sports.

Some of Britain’s biggest sporting stars have previously competed at the School Games before going onto international success, including Ellie Simmons, Jonnie Peacock, Katarina Johnson-Thompson and Adam Peaty.

The School Games has provided a fantastic springboard for some of the most talented school-age athletes, with over 200 graduates of the School Games Finals competing at this year’s Commonwealth Games, winning 85 medals.

The Games, which is supported by National Lottery funding from Sport England and the home country sports councils and delivered by the Youth Sport Trust, was established in 2006 after London won the bid to host the 2012 Olympic and Paralympic Games and formed a key part of the legacy programme.