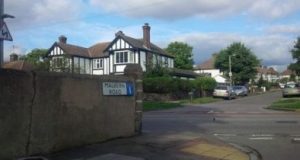 THURROCK Council has secured an interim injunction for a site to the rear of Malvern Road to prohibit caravans or any other residential buildings being brought onto the land.

A Temporary Stop Notice (TSN) was served on the site on Friday to cease unauthorised activity on the land, but this was subsequently breached which led to the council seeking the injunction.

Cllr Rob Gledhill, Leader of Thurrock Council, said: “I am very pleased that we have been able to get this injunction in place. Stop should mean stop whether that is erecting unauthorised extensions or laying foundations for mobile homes.

“Obtaining this injunction means that if the owner, occupiers or anyone tries to repeat last weekend and ignore the law of the land they may be acting in Contempt of Court. As such, the Council will investigate the breach with a view to applying to the High Court for a Committal Order. If that Order is made, anyone held in Contempt of Court could be imprisoned.

“I believe that the current planning regulations are wholly inadequate, and as well as writing to the Secretary of State calling for an urgent review of planning law, I will also be contacting all council Leaders to ask them to do the same, and to ask for more powers to be given to councils and to the police to deal with such situations.”