More than one in ten drivers failed eye checks in Essex

MORE than one in ten drivers failed on the spot eye checks in Essex in the last two and a half years, with one driver barely able to see beyond their windscreen, it has been revealed. 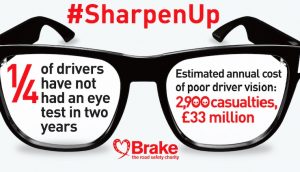 As well as testing drivers at the scene of an incident, Essex Police also proactively seek out drivers who may be at risk of failing an eye test as part of a new enforcement push.

The force’s plans come ahead of a move to eye test every driver stopped by police in Thames Valley, Hampshire and West Midlands.

Those who fail to read a number plate from 20m (65ft) away when stopped will have their licences revoked immediately in a new crackdown.

The new powers derive from Cassie’s Law in 2013, after 16-year-old Cassie McCord died when an 87-year-old man lost control of his vehicle in Colchester in 2011, having failed a police eyesight test days earlier, but a legal loophole meant he could continue to drive.

Police say data from the tests will be used to improve understanding of the extent of poor driver vision.

Officers can request an urgent revocation of a licence through the Driver & Vehicle Licensing Agency (DVLA) if they believe the safety of other road users will be put at risk if a driver remains on the road.

Under current rules, the only mandatory examination of a driver’s vision takes place during the practical test, when learners must read a number plate from 20 metres.

After a person has obtained a licence, it is up to them to inform the DVLA if they develop vision problems.

However Essex Police has suggested there could be thousands of drivers who are not driving legally.

Adam Pipe, head of roads policing at Essex Police, said: “Officers in our roads policing teams have been asking drivers to complete eye tests for over two and a half years and, in that time, we’ve completed more than 400 tests.

“The numbers of people who have failed this are significant. One in nine people failed the test with the worst test coming back at just 2.5 metres of visibility.

“As well as testing drivers at the scene of an incident, which our recording software now tells us to do automatically, we’re also proactively seeking out drivers who may be at risk of failing an eye test.

“Officers from our South Woodham Ferrers team will complete home visits for those who are over the age of 70, or who may have been reported as a driver who has failed to stop but not caused a collision.

“They can then complete the eye test at home and, if they fail, we have the power to revoke their driving license on the spot, which can be processed within just 12 minutes.

“If our visiting officers notice signs of other behaviours, like the onset of dementia, we can speak to our partner agencies for a more thorough welfare check.

“It’s really important that people across Essex continue to look out for each other and keep our roads as safe as possible.

“Alternatively, you can send video footage to us through the Safer Essex Roads Partnership’s Extra Eyes at saferessexroads.org/extraeyes.

“If you are worried about your own eyesight and how it might affect your driving, or someone else’s, you can call 101 and ask for our South Woodham Ferrers Roads Policing Team, who can arrange a home visit.

“For more information on how your vision can affect your driving, you can visit the DVLA website on www.gov.uk/driving-eyesight-rules”