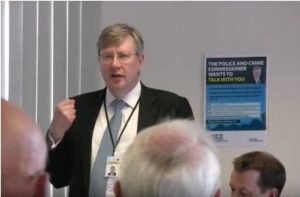 THE Essex Police, Fire and Crime Commissioner, Roger Hirst, spoke at the Thurrock Public Meeting this evening (11 September) at The Beehive in Grays.

Mr Hirst was joined by Jane Gardner, Deputy Police, Fire and Crime Commissioner for Essex, as well as Superintendent Craig Saunders from Essex Police and Justin Benson-Ryal, Station Manager for Essex Country Fire and Rescue Service. Also in attendance was Julie Rogers, Director of Environment and Highways at Thurrock Council, who is chair of the local Community Safety Partnership.

Mr Hirst opened the meeting with an overview of current crime statistics: ‘The big picture is, as I’m sure you are aware, crime across the country, crime across the county is, certainly in terms of police activity, on the rise. This is mainly because of new sorts of crime, some of that is to do with the internet, internet fraud, child sexual abuse online, harassment, stalking online, hate crime online. That’s up by a couple of hundred percent.

‘But there are other new crimes as well, like controlling and coercive behaviour in a domestic environment. Which means that domestic crimes are really less purely focused on violence, now also controlling behaviour, controlling people’s finances, not letting them go out, controlling their friendships, etc. Those are crimes as well now and those are being reported to the police.’

A public discussion later ensued, where residents could put forward their concerns to the panel.

One resident queried a previous statement on how many police officers Essex could be seen to gain over the next two years. Mr Hirst clarified: ‘Over two years the overall funding position, including the increase in council tax, should mean that we can achieve between 280 and 290 (police officers in Essex)’.

When asked what these figures would mean specifically for Thurrock, Mr Hirst replied: ‘Six officers in the local policing team and six in the community policing team, three in the domestic abuse team, plus another 26 in the operational support group which can be deployed here as well as anywhere else (in Essex).’

Another resident posed the question: ‘How quick can the police get into court to get travellers moved on?’
Superintendent Saunders replied: ‘There is very rarely a traveller encampment that happens in Thurrock that I am not personally involved with, and often that involves me speaking directly with the Chief Executive of Thurrock Council, for every single encampment that we have in the area.

‘You are right, we have more encampments than most places, I think it’s probably due to geographically where we are on the M25 here. The bit I will touch upon is the use of the Section 61 powers, which we used yesterday to move on an encampment in the area. We are not afraid to use them, but I can understand why sometimes it looks like we take our time. But I can assure you that I am never sat there laid-back waiting to use those powers and doing nothing.’

On the topic of traveller encampments, Ms Rogers also stated: ‘Primarily, first responsibility is with the council to deal with travellers, so whenever we get reports of an encampment our team will attend site and that will either be through our own enforcement officers or through the Essex Countywide Traveller Unit.

‘What normally would happen is if there is criminality and we can evidence that criminality, that’s the key to it- the evidence. Quite often there is a reluctance from residents to actually make a statement to say that they’ve observed it, or capture that evidence on any camera or footage. So, what would then happen is we would go through the normal process which takes 7-10 days to achieve, and that’s primarily because of the time it takes to get into court to get the order that we need to move them on.’

After the meeting, Mr Hirst said:

‘I think it just shows how necessary it is that we do this sort of meeting. There is some really tough feedback stuff that we’ve had to take notes about. Clearly, we need to circle round with our partners and get a plan together. I think what I’m hearing particularly about is the Town Centre here in Grays, and also about a couple of particular estates. There’s stuff we need to get on top of, that’s why we did it (the meeting).’

Present at the meeting was Labour Councillor for Grays Thurrock, Lynn Worrall, who also gave her opinion of the meeting:

‘I think the meeting was again much of a much, Mr Hirst came and he knew he was going to get a hard time. He did get a hard time. But I think as usual Thurrock residents stood up for themselves, and he has gone away with a flea in his ear and realises that you cannot just come here and do a tick-box exercise with us. We are worried about policing in Thurrock and we have a right to be worried about policing in Thurrock.

‘I don’t think turning up here once a year with a top table is enough, actually. I think that they should do much more. They should be better visible on a more regular basis and what they should do when they first come here is tell us what they’ve done about the stuff that we have raised at the previous meeting. It is simply not good enough to start with a clear page every time, they’ve got to tell us what they’ve actually done to put right some of the issues we have raised.’

A briefing document detailing crime trends and proactive work in the district has been made available on the Essex Police website: http://www.essex.pfcc.police.uk/

3 Responses to "Police Commissioner grilled at tough meeting in Grays"