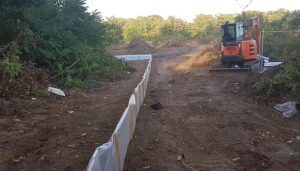 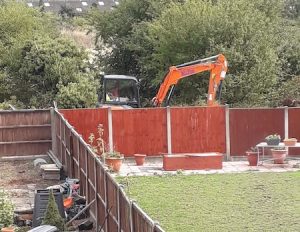 PLANS for a 102-home estate were deferred by councillors over concerns about the availability of GPs – but that hasn’t stopped diggers starting work at the site.

Residents who live on Moore Lane – near Devonshire Road, South Stifford, where the development is planned – are fiercely opposed the application.

Last month Thurrock’s planning committee was warned GP surgeries and dentists in the area are already stretched to breaking point.

Their fears were listened to by councillors and the application was deferred after a council officer told the planning committee that “there was no response from the health authority”.

Yet, just a few weeks later – while waiting to hear when the application would be discussed again – residents were stunned to see JCBs roll on site and start work.

Despite numerous requests, Thurrock Council failed to comment, giving no explanation for the use of JCBs on the site.

Michelle Peters, a resident on Moore Lane, said: “I was shocked when I first saw they were there.

“We were all under the impression this had all been postponed giving NHS England time to respond, but two weeks later I come home from work to find this had happened.

“To me it looks like they are clearing a roadway and they’ve made big piles of plants and bushes they’ve cut down. The rest is like a mud bath.”

A spokesperson for Bellway Homes admitted work was underway. He said: “This work is part of the pre-commencement conditions.

“We’ve had a few fences put up for ecology and a team of ecologists have gone in to monitor the ecology which we will do for around 30 days.

“It is all part of the pre-commencement conditions that we need to do.”

They said it was “difficult to say” what would happen to the land if the application is not given planning permission and stressed that “it’s a positive thing for these ecology checks to happen.”

However, pre-commencement work is typically carried out after planning permission has been granted as part of the conditions imposed on the application.

This was indicated in a comment made by the council’s planning officer at the meeting in mid-August.

The officer stated: “If there was a decision tonight to approve the application then before anything could happen in terms of development the site has to be cleared for ecology.

“There’s a window of opportunity.

“If, for whatever reason, the application was deferred that could have a knock-on effect on ecological clearance because it could potentially push it into next spring.”