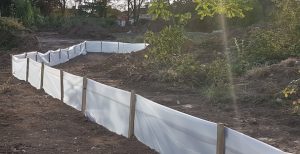 A VITAL document that could have blocked an application to build more than 100 homes was overlooked by the council, despite it being publicly available on their website.

When members of the council’s planning committee met in August, council officers told them the NHS had been contacted in April over an application for 102 homes on Devonshire Road but “there isn’t a response reported”.

This lack of response prompted councillor Gerard Rice to propose the application be deferred until the NHS has been consulted, adding he was “surprised” the council’s report fails to mention the NHS had been consulted.

He added: “We’re not talking about one or two homes here. We are talking about one hundred homes with no doctor facilities. I am surprised we haven’t got somewhere saying NHS England were consulted but haven’t responded but there’s nothing there at all and that does concern me.”

But the NHS did respond with a three page letter months before the planning meeting and the council had posted that response on its planning portal website.

In it the letter, dated May 18, the NHS states: “The GP practices do not have capacity for the additional growth resulting from this development and the cumulative development in the area.”

It also provided a health assessment that explains the application would require a contribution of £40,227 to create additional floor space at the Thurrock Health Centre in Grays.

The Devonshire Road application is now set to be considered again on September 13th and the council has produced a new report acknowledging receipt of the NHS letter but still recommending it is approved.

It explains that the council has an infrastructure requirement list, which lays out the most vital requirements for the borough, and the health centre in Grays is not on it.

Other suggestions “to improve capacity for the benefits of patients of the practice” have been discussed but are said to be “not compliant” with community infrastructure regulations.

The report notes: “The council cannot reasonably or lawfully accept contributions at this time towards local healthcare facilities.”

It fails to propose a solution to the increased strain on GP services and recommends councillors approve the application.

The strain on GPs in Thurrock is severe and the council’s Health and Wellbeing Scrutiny Committee heard on September 6 that the borough has one of the biggest shortages across the country.

There is a ratio of one GP to every 2,700 patients while the national average is one to 800.

The council failed to respond to a request for comment.