A CONTROVERSIAL new housing estate has been given the green light by planners after its developers stumped up almost £41,000 as a payment for health services in the area. 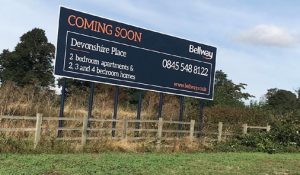 Councillors deferred a decision on the planned 102 new homes on a site adjacent to Moore Avenue in Stifford Clays because NHS England’s view on the project had not been put before them. Concerns were expressed that already overstretched health services would be put under further pressure and no-one knew the view of the health service.

At last month’s meeting councillors were told there had been no response from NHS England, but it turned out that information was wrong and officers had blundered by not bringing their message to the meeting.

That omission was remedied at tonight’s (Thursday, 13 September) meeting when councillors heard that developers Bellway were prepared to put up the money asked for by the NHS. Officers had suggested reason why this might not be acceptable, but they were discarded in discussions and now, even if the money doesn’t go to health services, it will still be spent of local services, possibly amenities for residents or education.

Prior to the meeting local residents had raised concerns that work had already started on the site, with bulldozers and other equipment working there. However, the meeting heard council officers had visited the site and confirmed the work was for ecological survey reasons, not a part of the development.

Committee chairman Cllr Tom Kelly: summed up the councillors’ views on the issue, saying work by the committee had been ‘due diligence.’

He said: “We had the deferral, it was due diligence and it is good to see there has been money made available, so that was good decision.”

However he went on the say that health issues and pressure on services were not primarily a planning matter! He told the meeting: “Hopefully we can use this application as case to see what issues we face in Thurrock but I don’t think you can reject this application because of the pressures on the NHS service, as we would have to reject many other applications. The pressure on the NHS is not a material planning consideration.”

Cllr Kelly did recognise that concern over the lack of GPs in Thurrock was a problem and said he would be taking up the matter.

“It’s my duty as chair of the committee to ask the leader of the council why we face this problem and why we are where we are. Twenty or 30 years of decisions has led us to this stage!” he said.

Cllr Gerard Rice, who had been the prime mover of the deferral, said: “It is welcoming we now have £41,000 from the NHS for a scheme for these 102 properties but it’s because of our intervention; not pure magic, but because we dug our heels in. We know there is a history of under-doctoring in the borough

“When we are building new properties it most proper that our officers make sure NHS England respond.

“But we do need the extra homes and I would go ahead with the recommendation this evening.”

The application was unanimously approved.