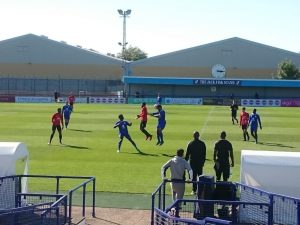 There were certainly thrills, spills and shock results on Saturday as two Essex Senior League sides were deposited out of the FA Vase by Eastern Senior League opposition. A week ago Saffron Walden Town almost pulled off a shock result in the FA Cup; on Saturday they fell to a May & Baker side who are embarking on their first Vase adventure, which now sees them in the 1st Round after beating the Bloods 4-1 at Catons Lane. Tom Harvey, Dean Hall, Reece Tranter and Dan Gilchrist scored a goal apiece as the Barking-based club put Saffron Walden to the sword, with Charlie Portway at least registering a goal for the hosts. Meanwhile at the Old Spotted Dog Clapton were gunned down by Jason Reynolds-Blanche who scored a goal in each half, the second of which from the penalty spot, to see Newbury Forest also cause a shock result on route to reaching the 1st Round themselves for the first time.

Barkingside were knocked out by Wodson Park 4-2 on penalties after Jacob Dingli had fired the Side into a 1-0 lead in the 76th minute. Steve Towers levelled up four minutes later and after extra time couldn’t find a winner,  it went  to penalties which the Spartan South Midlands team went on to win. Hoddesdon Town also suffered heart-break as Matt Eve scored a very late winner for FC Clacton, in the fifth minute of stoppage time in fact.  Jack Riddle had fired Hoddesdon into an eight minute lead which Jake Plane equalised in the 53rd minute. Joss Lillis restored the lead in the 64th minute but the hosts were only able to have their noses in front for a mere minute as FC Clacton again levelled up, this time via Harry McDonald. With the game looking destined for extra time Eve then popped up with his late goal to win the tie in the closing stages. A Stuart Zanone brace plus goals from Charlie Cole and George Pullen saw Takeley secure a 4-3 away victory over Brantham Athletic. Meanwhile Southend Manor are into the 1st Round draw after Nathan Dewberry scored all their goals in a dramatic up-and-down humdinger with Haverhill Rovers that saw the hosts race into a 2-0 lead; then Ben Bradley scored twice to level it up before Mark Lovell then gave the Thurlow Nunn outfit a 3-2 lead. Dewberry levelled things up before the break, meaning that at half-time the spectators had seen six goals; there were not so many goals in the second period but the one goal that was scored was notched by Dewberry in the 78th minute to see Southend Manor through. There was only one goal in the Hadley v Enfield clash and that was scored in the 34th minute by Ayo Odukoya to win the tie 1-0 in Enfield’s favour. West Essex went in at the break leading Stotfold 1-0 courtesy of a Cameron Gray goal. But Dese DeSilva levelled for Stotfold in the 71st minute and two minutes later Salem Amogka has fired the hosts into a 2-1 lead. Cue the West Essex come back as Tom MacLeod put West Essex back on terms in the 77th minute and then three minutes later they were back in front thanks to an Izzy Ogedi-Uzokwe strike. Tom Woodbridge then sealed the win in stoppage time with a shot that hit both posts before trickling over the line.

Two ESL sides went crashing out on Sunday; while Sawbridgeworth Town made their way into the 1st Round draw after a comprehensive 4-0 win over Coggeshall United. Jack Cousins opened the account in the 21st minute and Daryl Doolan then scored the first of his two goals four minutes later. Joseph Wright extended the lead early in the second half and Doolan then completed the afternoon’s work by scoring his second just past the hour mark. Stanway Rovers fell by a solitary goal at Baldock, while Sporting Bengal United certainly had their chances against Enfield Borough but found themselves two-down at the break with Tage Kennedy and Dervon Hurde causing the damage. Kamarl Duncan reduced arrears five minutes into the second half but any potential lifeline was cruelly thrown away by Kennedy who added his second soon afterwards. Yashir Rashid was able to pull one back from the spot but it was so deep into stoppage time that Sporting Bengal United had no time to muster one last forward rally.