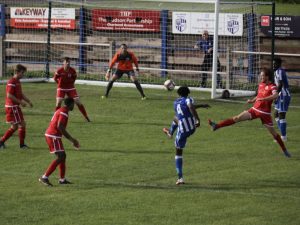 There were three Premier Division games played on Saturday; starting with leaders Hullbridge Sports who were able to snatch a point after Jimmy Cox’s 58th minute goal cancelled out the one James Peagram had scored for Walthamstow in first half stoppage time. Ilford are up to 3rd after beating local rivals Redbridge 4-1 at Oakside. Yemi Adelani bagged a brace with Jamal Dzotsi and Yasseir Nazor also chipping in for the Foxes. Sam Balfour notched the Motormen’s consolation. Meanwhile over at Mile End Stadium and Tower Hamlets remain in the drop zone after a 2-1 defeat to Stansted. Callum Ibe opened the Airportmen’s account as early as the 7th minute and Paul Clayton then doubled the lead midway through the half. The hosts were able to pull one back via an own goal two minutes from time.