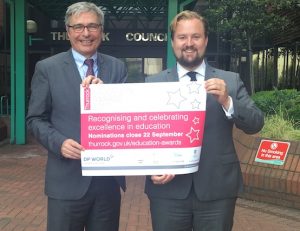 THE nomination period for this year’s Thurrock Education Awards has been extended by a week, it has been announced.

Nominations will now come to a close at 5pm on Saturday 29 September, giving parents, colleagues and young people an extra seven days to submit their entries.

Cllr James Halden, Portfolio Holder for Education and Health, said: “By extending this year’s nomination period we will ensure that as many people as possible have the opportunity to nominate in this year’s Thurrock Education Awards.

“We’ve had a great response to nominations so far and I’m confident that there’s still more shining examples of hard work in our early years, schools, colleges and sixth forms that deserves recognition.

“Nominations need only a short supporting statement of up to 300 words, meaning that they can be completed and submitted in next to no time at all. I encourage everyone who has someone to nominate in mind to make the most of this final opportunity and get involved.”

For more information and to submit nominations, go to thurrock.gov.uk/education-awards