Mayerling to be broadcast live from the Royal Opera House

THE thrilling ballet Mayerling will be broadcast live from the Royal Opera House in London’s world-famous Covent Garden to UK cinemas on Monday 15 October 2018. This haunting and emotional production reveals the glamour of the Austro-Hungarian court. The live screening will be followed by an encore screening on Sunday 21 October 2018.

Choreographer Kenneth MacMillan brings 19th-century Europe to life with this dark and dangerous portrayal. Based on the true story of Crown Prince Rudolf, the ballet reveals a country on the brink of collapse, impending war in Europe and a love affair between Rudolf and his mistress Baroness Mary Vetsera that ends in tragedy. Audiences are encouraged to feel something new through dramatically evocative scenes that challenge the conventions of classical ballet.

The Royal Opera House cinema broadcasts offer audiences the best seat in the house with exclusive behind-the-scenes footage, interviews and incredibly detailed close-ups of performers. Audiences are never far from a performance at the Royal Opera House with most UK viewers located within 30 miles of a cinema screening. In 2017/18 over one million people globally saw a production of world-class opera or ballet at one of over 1,500 cinemas in 51 countries.

Mayerling starts at 7.15pm in UK cinemas, lasting three hours and including presenting two intervals. The production contains scenes of an adult nature and may not be suitable for children under 12 years old. Following Mayerling, the next production in the Royal Opera House live cinema Season is Wagner’s Die Walküre on Sunday 28 October 2018.

The Royal Ballet’s Mayerling will be shown in UK cinemas on 15 October 2018 with an encore screening on 21 October. Mayerling will also be broadcast in cinemas around the world. Further details on dates and venues available here: www.roh.org.uk/cinemas 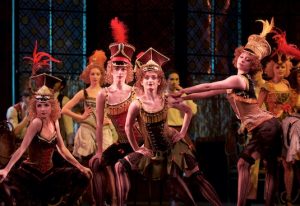