THE LEADER of Thurrock Council has slammed a Harlow councillor for revealing details of financial negotiations in a meeting. 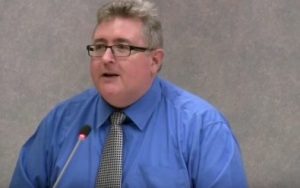 Last week, Harlow councillor Mike Danvers spoke at a Harlow Council and expressed his frustration that the chance for all council’s to claw back up to £20 million in business rates was being frustrated as “Thurrock Council wasn’t playing ball.

Now, cllr Rob Gledhill, who was absent from the meeting has hit back.

Cllr Rob Gledhill, Leader of Thurrock Council, said: “Thurrock Council are exploring how the proposed business rate retention could work in the south Essex corridor as a member of the Association of South Essex Local Authorities (ASELA). The date for submission for expressions of interest has not yet passed and we continue with the work as outlined.

“This was made very clear at the meeting by the Chief Executive and breaching the confidence of this discussion is not the way I would expect anyone attending these meetings to behave.

“This, I regret, is an example of a North Essex authority wanting to get as much as they can from the business rates raised in Thurrock and other South Essex councils without taking the pressures that industry puts on our infrastructure.

“We have repeatedly made clear we are looking to work more collaboratively across ASELA and this is one more reason why we should continue to do so.”

We put his comments to cllr Danvers. He said: “If Thurrock taxpayers are missing the chance to save up to a million pounds then I believe they have a right to know.

“I would also point out that all his Conservative colleagues in councils across the south of the country were trying to persuade his chief executive to enter into the political scheme.”