Crews were called to a road traffic collision involving an overturned HGV on the clockwise exit slip road at J29 on the M25.

On arrival firefighters reported that there were no casualties but there was a large diesel spillage.

Crews worked with Highways England to coordinate the clean up of the area. 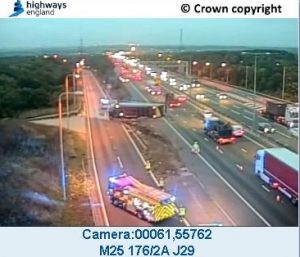 An overturned HGV has closed the clockwise exit slip road at J29 on the M25. One lane is also closed on the main carriageway within J29 due to a diesel spillage.

Essex Police and Essex Fire Service are on scene.

Recovery and clear up is being arranged.

One Response to "Wednesday Traffic and Travel: Overturned lorry on M25"