The main race was every bit as exciting as any of the previous World Finals had been at the venue, but with Goodearls TMT Team very much dominating the grid, the spectre of team racing was always a distinct possibility and with an attempt by the management to cut down on that activity in what was always intended as an individual event, it was going to be very difficult to police. 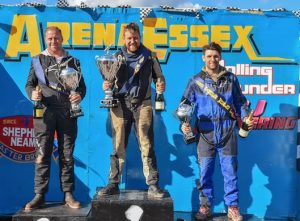 The first start did not last very long as a big pile up formed on the pit bend, taking out several front runners, but of more concern was the crash at the other end of the track which left John Harris requiring medical assistance after being followed into the fence by Alfie Cornish.

During the stoppage Jason ‘Boxer Jack’ Jackson was able to affect repairs for the restart but reigning World Champion, Adam Hitchcock was out, as well as young gun Charlie Korpiela.

Pole position man, Anthony Croshaw lead away at the restart with John Golden swiftly into second place and even more swiftly relegated by a hard charging Jackson. Croshaw tumbled down the places as Jackson took up the lead. Usually one would expect to see Jackson disappear into the distance but not on this occasion, the earlier damage possibly taking its toll.

South Ockendon’s Sonny Sherwood was taking chunks out of his lead and Dean Goodearl and rapid West Country lady racer, Sophie Fasey were also catching the lead pair, as they began to dice. Sherwood moved into the lead but almost immediately began getting hassles from Goodearls team mates with Bill Crittenden just failing to hook him out on the back straight. Goodearl bumped Sherwood wide on the pit bend and a handily placed TMT car delayed Sherwood enough to give Goodearl a break, although he now had Fasey on his back bumper. Sherwoods race went from bad to worse with Matt Butcher hooking him out and he then went piling into the parked up Dom Hall car.

Dave Bull by now was coming through from the back of the grid and looking like a strong contender but it was his own team mate who unwittingly contributed to his demise, Jackson bumping him wide on the pit bend and Bull run into the car of Mark Marchant, Marchant having been aiming for the car of Fasey.

Fasey was going like a train now and having dodged a couple of bullets she made a bid for the lead on turn one, bumpering Goodearl wide and diving up the inside. However TMT’s Mark Hutton managed to pitch her into a spin and she piled into the parked cars of James Steele and Kenny Gabriel, ending her race. With just a couple of laps left, Goodearl was now a long way clear of second placed Jackson, but as he rounded the last corner it was clear that Alfie Lee was intent on stopping him. Goodearl hesitated and picked an outside line around some wreckage whilst his team mate, Dom Hall, crashed Lee out of the way, clearing the way for Goodearl to take the flag.

A lengthy stewards enquiry eventually saw the result declared as they crossed the line, so Goodearl took the win, ahead of Jason Jackson and George Goodearl.

The Stock Car Supreme Championship saw Karl Totham strike early, bumpering Alfie Jones out wide on the first corner and snatching a lead he was never to lose. Jones was involved in a race long battle for second place with Nathan Roberts, but despite getting alongside at one point he had to settle for third.

The Reliant Robins put on a great show for the sparse crowd, those that braved the early heavy rain were rewarded with a very sunny afternoon. Shane Harvey, Ray Layton and Steve Willis shared the race wins whilst Harvey won an impromptu Destruction Derby.