After having to drop out of the league last season due to shortage of players, Thurrock made a return to East Division 8 on the National pitch at Lee Valley with father and son combination Martin and Robert Healy making their debut in senior hockey. The opposition are a team who having formed for last season, were promoted by two divisions for this season. Tower Hamlets began strongly with slick accurate passing which caused Thurrock to “chase shadows” with keeper Ryan Jones making a string of outstanding saves. Gradually Thurrock got into the game and made some promising moves with Martin Healy seizing on a pass from Darren Clark and shooting inches wide. However these events were rare and it was no surprise when the home team went into the lead with a shot from the edge of the D that flew into the top corner of the net. 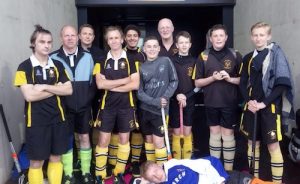 Within minutes a well-worked short corner routine brought a second goal. Thurrock continued to battle and Ben Clark was unlucky to see his shot cleared off the line. A goalmouth scramble led to the ball hitting a defender’s foot and Tower Hamlets added a third from the resulting penalty flick just before half time.
Thurrock started the second half with determination Martin Healy seized upon a loose ball and quickly turned only for his shot to rebound off the post. A minor altercation, saw a player from each side receive a card and temporary suspension, this effected Thurrock the most and the home side added two quick goals. Jake Lamb intercepted a pass and dribbled the ball out of defence before playing a one-two with Robert Healy and then slipping to Ricky Smith who was unlucky to be dispossessed inches from the goal line. Thurrock refused to ” throw in the towel” and maintained their efforts but fatigue coupled with a series of substitutions by the large Tower Hamlets squad eventually took its toll and Thurrock were soundly beaten.

Thurrock got their season off to a positive start against the newly promoted Redbridge. The opening minutes saw Thurrock on the back foot, but a good move on the counter saw Darren Clark score with a reverse hit shot under the keeper. With the nerves settled, Thurrock began to play their passing game, and midway through the half, Steven Abbott scored with a clean strike to the bottom corner after a superb flowing move from defence to attack. Thurrock should have gone into the break with more goals, but for some good saves from the opposition goalkeeper and some wayward shooting.

Thurrock continued with their fluid passing in the second half and quickly scored again through Abbott. Redbridge finally got on the scoresheet to pull one back, but within 2 minutes Thurrock had the 3 goal cushion with Abbott scoring his hattrick. Redbridge continued to attack and scored another from a penalty corner. With the opposition forcing the game, Thurrock won a penalty corner which was converted by Abbott after good work by Paul Mailey to make it 5-2. Redbridge threw everything into the last 10 minutes with Thurrock keeper Dave Leeks producing some fine saves and Max Blake marshalling the defence well, but they finally managed to score another to make it 5-3. Thurrock rounded off a fine display with Man of the Match Abbott scoring his 5th of the game to make it 6-3. Next week Thurrock Mens 1st team are away to Southend.

The start of the season began with a trip to Witham for the Thurrock Ladies 1s, which from last season we knew it wasn’t going to be a gentle introduction.
During the first half we played strong with some good passes following through from defence to midfield to the forwards at the top of the pitch, however a quick break from Witham put them in the lead, with some solid tackles and great team work we quickly fought back as a unit with a great finish by Charlotte Adnams levelling it 1-1.
After a half time chat we went back on to the field where we were determined to get another in the back of the net. Witham fought back and scored a great goal, but with us creating another opportunity we levelled again from Charlotte Adnams. Both Witham and ourselves were fighting strong, Witham scoring again we had 5 minutes left till the final whistle blew, then a penalty flick being awarded our Nikhol Chapman who has returned from injury this season stepped up to end the game 3-3.
Some great work from all of the team for the first game with man of the match very deservedly being handed to Joey Taylor.