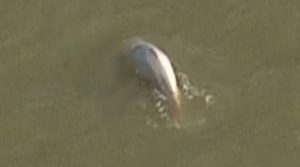 A BELUGA whale was sighted off Tilbury, more than 1,000 miles from its usual habitat in the Arctic.

The ghostly white whale was videoed and photographed coming up for air on Tuesday lunchtime. Whale experts said the animal appeared lost but seemed to be swimming strongly.

Julia Cable, the charity’s national coordinator, said: “It is swimming strongly and appears to be feeding, so there is no indication that it unwell or acting strangely. We are not particularly concerned about its welfare apart from the fact that it really shouldn’t be there.

“We do have someone going down to keep an eye on it and report it. We are hoping it is not going to get in any trouble.”

Cable pointed out that sightings of beluga whales in British waters were very rare and that she believed the last sighting was three years ago off the Northumberland coast. “They are an Arctic species so they usually swim around Greenland or Svalbard, a lot further north,” she said.

One Response to "Beluga whale sighted off Tilbury"