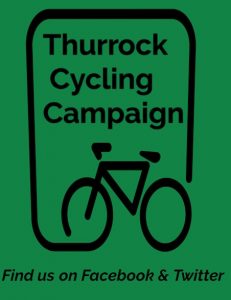 The 13th October will see cyclists, campaigners and environmental groups come together to support the “Stop Killing Cyclists” led protest –

‘National Funeral For The Unknown Cyclist / The UK’s First Pedal On Parliament’.

The message is hard hitting and pulls no punches and not unlike the protests that took place in The Netherlands in the 1970’s “Stop de Kindermoord” (Stop the Child Murder in Dutch). 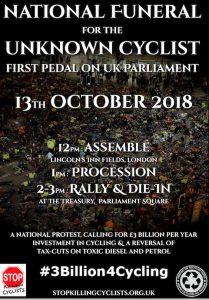 Most of the protests led by ‘Stop Killing Cyclists’ have been in this vein, including die-ins to emphasise the point and show the reality of the danger on our roads.

Many of the SKC campaigns have brought about successful changes in the capital, this time they are going nationwide because everyone has a right to cycle in safety.

One thing’s for sure, we can expect this one to be very visual.

Of course as well as the safety element there is the wider benefit of a high quality ‘Dutch’ type of cycling infrastructure – with obesity on the rise and vehicular pollution (very pertinent in Thurrock) at deadly levels, cycling is a positive way to address these issues.

I speak from experience when I draw attention to the mental health benefits of cycling too.

We are thirty years behind our neighbours in The Netherlands, there is a lot of catching up to be done.

For years cycling infrastructure funding has seen only ‘bread crumbs’, we are now calling for a decent slice of the transport budget to enable proper change across the UK.

Thurrock Cycling Campaign came about after being inspired by being personally involved in the Stop Killing Cyclists group.
We are hoping to bring a bit of that energy, resolve and determination to Thurrock.