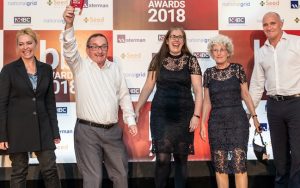 A council and its development partner have picked up a national award after putting the community at the heart of £1billion plans to transform Purfleet.

The award came in recognition of the approach that has been taken to working in partnership with the community to shape the Purfleet proposals and build support for the project, including closely involving the Purfleet-on-Thames Community Forum, regularly consulting the community and establishing a resident-led Purfleet Community Design Panel.

Cllr Mark Coxshall, portfolio holder for Regeneration, said: “We are all very excited by the proposals for Purfleet and the chance to create new opportunities for our residents, including 2,850 much-needed new homes and a new town centre.

“The council and PCRL have shown a strong commitment to community engagement throughout the project and I am delighted that has been acknowledged with this award.

“Another thing we have really prided ourselves on with the Purfleet scheme is a real infrastructure-first approach, which will now set the template for future major developments in Thurrock.”

Ken Dytor, chairman of Urban Catalyst and founding director of PCRL, developer of the Purfleet scheme, said: “This is fantastic recognition of the value of collaboration and underlines the progressive approach Thurrock Council has taken to support our regeneration plans.

“The council’s long-term vision and its willingness to invest in a once-in-a-generation opportunity to revitalise an important part of the South East is a shining example of what Britain needs to do to reinvigorate communities, creating new jobs and homes.”

John Rowles, Chairman of the Purfleet-on-Thames Community Forum and Purfleet Community Design Panel, added: “I am really pleased the forum has had the opportunity to be so heavily involved in the development of this exciting scheme and that the value of good quality community engagement has been recognised with this award.”