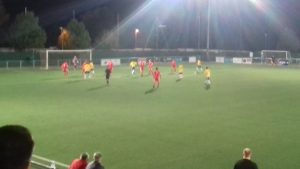 Woodford Town got the latest round of ESL fixtures started with a 2-0 home win over Takeley on Friday. The visitors took the short trip down the M11 but a lacklustre performance saw them succumb to an Ellis Routledge goal in the 57th minute; then after a last minute corner saw Takeley put every man in the box – including ‘keeper Ronnie Yeates, the ball was cleared to DeJuane Taylor-Crossdale who had the easy task of firing the ball home into the unguarded Takeley net to definitely make sure of victory. The win moves the Woods up to fourth, while Takeley after a good start to the season have now won one from their last four league games, which drops them down to seventh.

Hullbridge Sports made it a week of grinding out 1-0 away victories as they followed up Tuesday night’s feat at Saffron Walden Town with a similar result at a rain-sodden Oakside. Redbridge could have scored early on in the game as Jack Stevenson had a shot struck the crossbar. The hosts maybe had the better of the chances, but the leaders did hit the post themselves, before Nathan Scarborough headed home Robert Hodgson’s cross in the 64th minute to capture the points. Hullbridge may have won ugly, but the win keeps their unbeaten run going and maintains a five point lead at the top of the table. Stansted remain on Hullbridge’s tail after a 5-2 win at Clapton. Jordan Palmer inflicted first half damage as he struck twice towards the end of the first half to hand the Airportmen a 2-0 lead at the break. Palmer completed his hat-trick within three minutes of the re-start, and then Ollie Bell made it 4-0 just after the hour mark. Steven Sardinha pulled one back for the Tons, but Callum Ibe then added another goal to Stansted’s tally in the 75th minute; a minute later Clapton were able to reduce arrears but unable to prevent Stansted leaving the Old Spotted Dog with all the points. Chris Clark kept a clean sheet against his former club on Saturday but it was James Peagram who really came back to haunt Ilford. His 45th minute strike was enough to hand Walthamstow a 1-0 victory that sees them up to third.

Down at the bottom and the two teams currently in the drop zone both received drubbings; in the case of Barkingside it was against fellow-strugglers Leyton Athletic, who nonetheless came through this encounter five goals to the good. Barkingside may have had most of the possession in the first half but were gunned down by Emmanuel Oluwole and Francesco Cicconi in the 40th and 41st minute respectively. Any hope for a Barkingside revival were dashed early in the second half when Cicconi added a second, with Dwade James then a further two goals for Leyton Athletic to add polish to the win that now sees them sitting seventeenth. Tower Hamlets meanwhile shipped six without reply at St Margaretsbury, who saw Charncey Dash claim a second half hat-trick. The hosts may have only gone in at the break a goal up, but they unleashed their fire power in the second period with Luke Marshall (60’) and David Greene (81’) also putting their names down on the score sheet.

Imrul Gazi has found a way to turn Sporting Bengal’s fortunes around, as they suddenly have a goal machine leading their line who followed his midweek hat-trick at St Margaretbury, with a similar feat at home to Sawbridgeworth Town. Jay Knight is the man who did most to crush the Robins, although Charles Gregory and Kamarl Duncan both had a major part to play as they had both notched a goal apiece inside the opening fifteen minutes. With a 4-0 half time lead there really was no way back for the visitors, although they did score twice via Danny Wickenden. Sporting Bengal are twelfth after this encounter, with Sawbridgeworth a place below.  Jayden Hocking-Rising and Ayo Odukoya fired Enfield into a 2-0 lead, but Stanway Rovers were able to pull one back before the interval through Toby Blanch. However Odukoya added a second with fifteen minutes remaining to seal the win that moves Enfield up to tenth. Stanway meanwhile are circulating just above the bottom two in eighteenth. Hoddesdon Town made it three away draw in a row, but seeing as two of those draws came after their hosts found late equalisers is probably a bitter sweet pill to swallow. On Tuesday it was Nick Walk salvaging a point for West Essex deep into stoppage time; on Saturday it was Charlie Portway who cancelled out Connor Bolton’s goal with an 87th minute equaliser to ensure Saffron Walden Town salvaged a point. Hoddesdon Town are fifth, Saffron Walden Town are sixth, a point between the two after this one. Cameron Gray’s goal in the 52nd minute was enough to see West Essex beat their hosts Southend Manor 1-0.