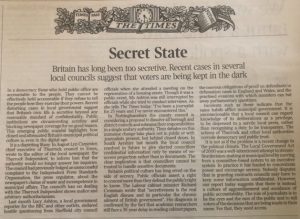 TWO days after being named and shamed in the comment column of the Times newspaper, Thurrock Council’s chief executive Lyn Carpenter avoided having her performance scrutinised on Monday evening when council leader Rob Gledhill adjourned her performance review in the ‘interest of being open and transparent.’

The meeting of the authority’s general services committee should have heard Ms Carpenter’s appraisal of her performance over the last six months, with councillors having the opportunity to quiz her in public over any concerns they might have.

The agenda detailed many of the achievements of Ms Carpenter over the last year but seemed light on what are called “Development Needs”.

To some, the report contrasted sharply with the criticisms made by Thurrock Labour and Thurrock Independent councillors who have accused the chief executive of running the council as “her personal fiefdom”.

Ms Carpenter has been widely condemned for her management style of the council, whose policies under her leadership were described by the Times as actions that corrode democracy and public trust.’

The only councillors in attendance this evening, aside from Cllr Geldhill, were Conservative Cabinet member Cllr Mark Coxshall and the Independent group’s deputy leader Cllr Jack Duffin.

Labour councillors did not attend the meeting, having previously stated their disappointment that the committee was being convened at a time when it clashed with their regular political group meetings. The Labour nominees to the committee are Cllr Oliver Gerrish and Cllr Gerard Rice. Cllr Gerrish is a former leader of the Labour group, but stood down in August. His replacement as leader is Cllr John Kent, but as the council scrapped its scheduled full meeting in September because there was ‘not enough business’, there has been no opportunity for him to be nominated to the committee, so he couldn’t have attended, even if he had wanted to.

Cllr Duffin told the Thurrock Independent that he had not been informed of the decision prior to the meeting, nor it is believed had the Labour group. It is likely the meeting will be reconvened on a date to be agreed in November.

In his statement Cllr Gledhill said: “Everyone knows that I am exceptionally fair when it comes to things like this and we do need to be open and transparent and we do need that political balance on this committee.

“So what I am going to is adjourn this item to a date to be fixed. Then this can be properly discussed and everyone can have their say.”