ANDREW Mackinlay, the former member of Parliament for Thurrock, greeted Vanessa Magee of the Royal British Legion at the Thameside Theatre when attending a performance of the musical
“ Oh what a lovely war”. 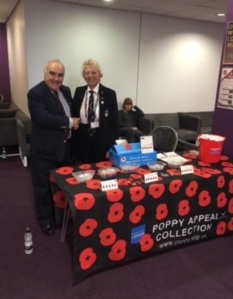 The musical was performed by the Thurrock Court players as part of the centenary commemorations marking the end of the First World War.

He thanked the borough’s Royal British Legion for “their marvellous record and never-ending commitment , supporting and sustaining former service personnel ,and their loved ones… over the past Century”.

He said: “I shall never forget, and will always appreciate , the tremendous friendship and support I received from the Royal British Legion , whilst I was the member of Parliament…. particularly in relation to my campaign to achieve Pardons for those British soldiers executed in World War; Who were suffering from shellshock and post traumatic stress .”

Andrew Mackinlay went on to say: “ I congratulate the Thurrock Court Players for their wonderful presentation of the musical oh what a lovely War, commemorating in song and in dance the tragedy and the hypocrisy associated with the terrible conflict of 100 years ago. It was simply a wonderful performance”.

He went on to commend the initiatives of local groups and the Borough Council in their programme of commemorations.

“I shall lay a wreath at the Menin Gate in Ypres, on the eve of the armistice centenary dedicated to the men of Thurrock who Perished in the Great War .

On the previous weekend (4th November) I look forward to attending the service of remembrance and commemoration at the Purfleet Heritage Centre. I would like to encourage as many people as possible to attend this service or any of the war memorial services to be held on the main armistice commemoration on Sunday 11th November.”