MEMBERS of Thurrock Cycling Campaign joined hundreds of other protestors in London on 13th October to call for more investment in protected cycling infrastructure, at the so called ‘National Funeral For The Unknown Cyclist / The UK’S First Pedal On Parliament’. 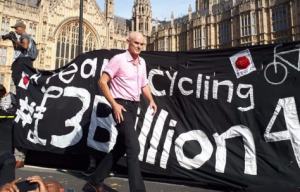 Members of Thurrock Cycling Campaign met at Fenchurch Street to then made their way by bike to the assembly point for the start of the proceedings.

They were joined at the ‘Stop Killing Cyclists’ led protest by more than twenty five other cycling groups from around the country.

‘Enough is enough’ was the rallying cry from Donnachadh Mccarthy ( Co – founder of Stop Killing Cyclists) as they remembered the people that have died on our roads and of transport pollution.

Their demands and campaigning did not go unheard as the protest was the first news item on BBC London news later that evening.

From start to finish the day was somewhat of a spectacle as a horse-drawn hearse complete with casket led the protesters from Lincoln’s Inn Fields to Westminster.

At this point the protesters laid on the ground with their bikes outside parliament to perform a ‘die -in’, a powerful and moving demonstration in memory of all the cyclists that have been killed on the UK’s roads.

A rally at The Treasury concluded proceedings with various speakers including

Caroline Russell – Green Party member of the London Assembly and Councillor for Islington laid down the challenge to the government to properly fund walking, cycling and public transport and to get fossil fuel out of our transport system.

Rosamund Kissi – Debrah, mother of eleven year old Ella Roberta who died of illegal air pollution in London on 15th February 2013 spoke of the silent killer ‘air pollution’ which is responsible for killing 40,000 people every year in the UK.

Rosamund is now an air pollution campaigner and founder of the Ella Roberta Foundation in memory of her late daughter.

An impassioned final message was given by Donnachadh McCarthy for the government to act upon the call for proper funding for cycling infrastructure and to swiftly act upon the climate emergency we are now facing.

Founder of Thurrock Cycling Campaign,, Matt Hill said: “Thurrock is one of the most polluted boroughs in the country and cycling is a positive way to address this and it’s essential we cycle in safety.

The most frequent thing I hear when campaigning is ‘I would cycle but I don’t feel safe on the road to do so’ to encourage and empower more people to take up active and sustainable travel – a proper, cycling infrastructure is needed.”