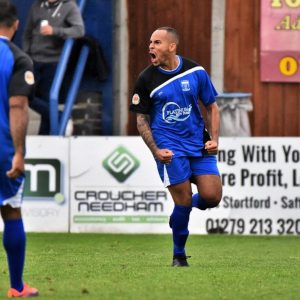 Callum Ibe Fires Stansted Back To The Top

The Premier Division began on Friday night at Mile End and saw Sporting come back from two goals down early on to continue their terrific recent form and defeat Clapton.  Eusebio DaSilva and Jeffrey Cobblah had The Tons two goals up early on but a Jay Knight brace brought the hosts level before Jason Ngandu and Steve Carvell netted in the final fifteen minutes to seal the victory and see the home side into sixth spot, whilst Clapton drop to tenth.  Onto Saturday and Barkingside grabbed a precious point and ended their losing run after holding Hoddesdon Town to a draw at Lowfield, the visitors went in front after just nine minutes through Harry Bushell but Side levelled immediately thanks to Antione Akinola, and it means Hoddy remain fifth whilst Barkingside remain bottom, five points adrift of second bottom Hamlets.  Takeley ended their woeful losing run with victory at Ilford, Charlie Cole netting twice inside the final five minutes to get the points, lifting the visitors into eighth spot whilst Ilford drop to ninth, and St Margaretsbury inflicted another home defeat on Redbridge with victory at Oakside.  Charncey Dash gave the visitors a fourth minute lead and then Dan Ferringo doubled their lead ten minutes from time, and although Patrick Duggan netted a late consolation for the hosts, the visitors took the win and moved up to 14th, whilst Redbridge are now 15th.  Stansted are back on top of the pile after they thrashed Leyton Athletic at Hargrave Park with all five of the Airportmen’s goals coming in the final half hour.  Callum Ibe grabbed a brace and Connor Hammond, Paul Clayton and Jack West also netted as the hosts put the visitors to the sword and now top the table on goal difference, whilst Leyton slip into the bottom three.  Previous leaders Hullbridge Sports are now second on goal difference after they slipped up at Stanway Rovers, a Toby Blanche brace had the hosts two up and although Nathan Scarborough pulled one back it wasn’t enough to prevent the hosts taking the spoils and they lifted themselves up to 16th as a result.  A late Izzy Ogedi-Ozokwe goal denied Tower Hamlets a vital win down at the bottom as they ended up drawing against West Essex at Mile End.  Symeon Taylor put West ahead, only to see Luke With and Oseman Usifah turn the match around, but Ogedi-Ozokwe netted an 89th minute leveller to make sure his side left with at least a point.  Hamlets remain in the bottom two whilst West drop to 11th.  Another side in good form are Walthamstow and they are now just four points behind the top two in third after they saw off Southend Manor at Kitchener Road thanks to goals from James Peagram (penalty) and Craig Pope, a result that sees Manor slip into the bottom four now.  Finally at The Harlow Arena and Saffron Walden Town saw a late winner from Daniel Trendall saw them defeat Woodford Town, Craig Calver had given Walden the lead but Connor Leon brought the hosts level.  But Trendall netted three minutes from time to see the visitors to all three points and remain fourth in the division whilst Woodford drop to seventh.