ANGRY taxi drivers and operators packed a meeting room at a Grays pub on Tuesday evening and called on Thurrock Council to offer them more support in their fight to maintain their livelihood and in the battle against firms like Uber which they say are operating illegally within the borough. 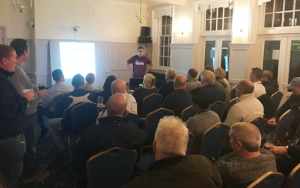 The inaugural meeting of the Thurrock Taxi Drivers Association at the White Hart saw a presentation by its founder Ian Colley who called on the borough’s hackney carriage and private hire drivers to work together and local operators to put aside and differences and unite in a concerted campaign of action.

Aside from international company Uber and other similar app-based operations, chief villain of the piece according to Mr Colley and many of the drivers and operators is Thurrock Council’s principal licensing officer Paul Adams who was slammed for his “arrogant attitude and complacent approach” to the problems faced by local drivers and companies.

Mr Colley said: “This association has been formed to give Thurrock cabbies and operators a voice and to protect the Thurrock taxi industry which is under siege. There is strength in numbers and together instead of being lone wasps that the council can brush aside, we can swarm in numbers and sting Mr Adams and his colleagues into action to do what they should be doing and protect not just the drivers and operators who pay their wages, but the safety and security of residents of the borough who use taxi services.

“There is no doubt about the moral and legal right here. Uber drivers are clearly flouting the outdated cross border hiring law to operate on the cheap in Thurrock. And by cheap I don’t mean cheap for the people who use them, they often find out that the fares they have to pay are not the expected ‘estimated’ ones, but inflated prices caused by slow driving and long route-taking.

“By cheap I mean by unscrupulous operators who pay much less than we have to do to obtain our licences in other boroughs but then drive over our borders and operate here, taking custom away from local drivers and businesses by operating in an underhand and illegal manner.”

Mr Colley then produced video and pictures (right) of Uber drivers touting for casual business outside local stations and other public places – and of them accepting cash for journeys that had not been pre-booked.

Among the evidence was film made by Mr Colley. He spotted an Uber can parked near Lakeside and walked over to the driver and asked if he could have directions to a nearby toy store. Instead, the driver offered to drive him for £5. Mr Colley accepted the ride, paid the driver and then submitted the film as evidence to Thurrock’s licensing team as evidence of illegal activity only, he says, to be told it wasn’t acceptable as evidence because the Uber driver didn’t know he was being filmed and it was ‘entrapment’.

Derisory comments from drivers at the meeting suggested that wasn’t the only example of Thurrock Council’s licencing team ‘siding with the easy option’.

Mr Colley then told drivers that the advice from Mr Adams, and his fellow licencing officer Laura Manning, at a meeting he attended to introduce the association, had been for local drivers to ‘get their own app’.

“Seriously?” Mr Colley told his members. “An app could cost many thousands to develop and implement and is anyone seriously going to suggest that Thurrock residents would want lots of different apps on their phones from different firms? And even if we could get together and build a ‘catch-all’ app for Thurrock firms, how will it be policed and monitored to the standard of service and safety that Thurrock Council demand – quite rightly – of us?”

Members agreed they needed to work together to put pressure on Thurrock Council to be more responsive to their needs – and those of residents who needed a safe and reliable service.

Options they have agreed to consider include a petition to the council calling on it to make a by-law limiting and controlling how cross border hiring works, getting together a package of evidence to prove that visiting companies are operating illegally and to arranging a public protest action – though not one that would disrupt traffic or services unless it was absolutely unavoidable.

Mr Colley told members it was vital that action be taken relatively quickly to protect the standard of services in Thurrock – particularly as he was aware that the council will be negotiating around £4 million worth of school contracts next summer.

“When it comes down to it the council has already said that the main deciding factor in that will be ‘best value’ – by which they mean the cheapest, not necessarily the best for Thurrock residents and for the businesses in this room.

“They are flouting the rules and they are not operating to Thurrock’s standards.“