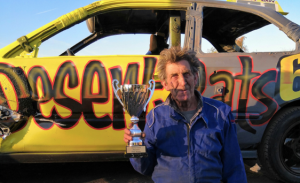 SOME 17 years ago I wrote an article for the Faversham Times about legendary Faversham Banger driver Ken Hollamby getting ready to retire from the sport at the age of 61.

Well he didn’t retire and on Sunday 21st October 2019 at the soon to close Arena-Essex Raceway Ken won The Ronnie Martin Memorial Banger Legends Championship. Ken was the oldest competitor in the field of over 60 drivers at a spritely 78. To qualify to race in the Legends you have to be either over 50 or raced before 1995. The meeting was set up in 2016 by the family of Legendary Banger racer Ronnie Martin who sadly passed away that year. Someone whom Ken raced against in the 1970s. The final was very eventful and didn’t see Ken take the lead until the final two laps in his Honda Civic. Commentator Rob Porter said Ken was old when he commentated on him racing at The Old Ferry Road Iwade circuit forty years ago, but a more worthily winner you would not find. Asked if Ken would now retire, he replied nope I’ll still carry on racing.

Before the meeting Ken told me that him and his Grandson Aaron Harris and his mates had worked late into Saturday night on the car after changing the engine three times because of problems. Aaron said in the end we put the engine from my race car in it just so it would go. He went on to say they had encountered problems after problems with the car, but was determined to get Ken out for his last trip around the famous old circuit.

For Ken the road to success has been a long one. He started racing in 1966 at Frittenden and admitted it frightened the life out of him, but he had got the bug and now 52 years on he still races in the Banger Stox at The Coombe Valley Raceway, Dover. He won the Banger track championship twice in the 1990s at the now defunct Throwley Circuit. He raced at The Swale Motor Racing Club Iwade circuit until it closed in 1994 and most of the other now defunct circuits in Kent.

When I started racing at the age of nineteen in 1989 at Coombe Valley Ken was on hand with many words of wisdom. I was racing Minis and he told me how to take the corners and make my car feel wider than it really was. His tips and advice often worked. We became good friends and when I won my Officials Championship at Iwade in 1993, Ken was there to congratulate me. I’m just one of many who have received help from one of the true greats of the sport over the years. Always given with a laugh and that cheeky grin, he is one of the most admired drivers in the sport. Although he spends most of his time helping other family members race these days.

Within twenty minutes of him winning the championship and the news and photo being published on Facebook, over 400 people had either said congratulations or liked the picture. These included Joyce Steed, the widow of former Coombe Valley promoter Brian Steed who passed away earlier this year. She said Brian would have been over the moon seeing one of his old drivers win the championship. Others like former Coombe Valley driver Mark Strevens said there wasn’t a more deserving winner. If you asked many who they would have wanted to win the championship before the start, most would have said Ken. I asked Ken after the race what does his wife Betty put in his tea to keep him going and he replied with a laugh and said two sugars. Ken went on to announce that he had decided to race at the penultimate meeting at Arena-Essex on Saturday 3rd November in the bangers with the youngsters, the day before the circuit closes after 41 years.

Ken or Sir Ken as he often called after a Facebook group was set up to get him an MBE for services to the sport. To us he is already an MBE – Mad Banger Enthusiast. Others have said there must be a place in The Guinness Book of Records for the oldest Banger Driver ever to win a race.