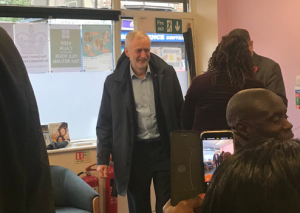 JEREMY CORBYN has praised a Tilbury-based voluntary organisation for the ‘absolutely crucial’ services it offers the local area.

The Labour leader visited Thurrock today (Thursday) to meet with trustees of the One Community Development Trust, an organisation that works with local people to develop their skills and improve economic prospects. The Trust is also a recent recipient of The Queen’s Award for Voluntary Service.

Mr Corbyn said he was ‘inspired’ by the people who use the Trust’s services.

He said:”They’ve been through great difficulty in their lives and have put their lives together through the help of this voluntary centre. Well done them.

To me, it’s a good model. Building up a good relationship with local employers means that many of them get jobs locally afterwards, so it’s fantastic.”

YT asked Mr Corbyn how important local organisations, such as the One Community Development Trust, are for building economic prosperity in an area?

Mr Corbyn said: ‘Absolutely crucial. I started my political life as a councillor in North London, I was chair of Community Development and I spent a lot of my time trying to ensure we spent money on local community centres and voluntary organisations, because it gave everyone a chance. Sometimes people don’t achieve all they could in school, sometimes problems take over in their lives.

‘There has to be a place to support everyone, and so this community centre and community centres in general do that. That’s why we’re very keen to make sure a youth service becomes a statutory requirement of local government, and that local government have enough resources to support voluntary organisations like this wonderful centre we’re in now.’ 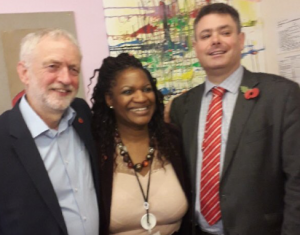 Yewande Kannike is the CEO of the One Community Development Trust. She reflected upon the visit by the Labour leader. Shee said: ‘It’s really, really nice to have someone so high profile come to a small local organisation like ours because we are an independent body working to support local people, and you kind of tend to feel as a small organisation, as we are, that people are more interested in the bigger organisations that have a national and international profile. I think it makes us feel valued”.

‘I think people spoke from the heart (today), and that was really good. People spoke from their own personal experience. And I think what came across for me was they all felt they’d been empowered, not only to be able to get jobs for themselves, but also to support their families… Our vision is to inspire local people to do their best for themselves and their local community, so their whole family benefit.’

Cllr Kent said:‘It’s always good to come to One Community here in Tilbury because there’s such enthusiasm, such vibrancy, such energy in the room, and they do some really fantastic stuff. So it was good to introduce Jeremy to some of the individuals involved and to hear of the some of the real success stories first-hand.’