Tilbury man is standing for Sheriff! 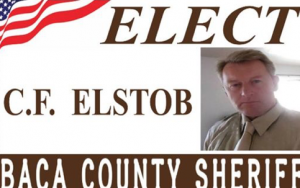 THERE could be a new sheriff in BA County, Colorado. That sheriff is C.J Elstob. Why are we telling Your Thurrock readers? Because the prospective sheriff hails all the way from Southey Walk in Tilbury.

Colin Elstob left Tilbury in 2001 to start a new life in the United States of America. He settled in Springfield, Colorado. married Marcia Olivas (Elstob) and became a permanent resident in 2004.

Colin’s facebook page has full details of why he is running for sheriff. The election is on Tuesday November 6th.

Colin said: “After becoming a U.S Citizen I began to study U.S Law Enforcement. I’ve spent some 20 years in the U.K (England) working within security services which covered security on cruise ships, casinos, mobile security, door security and private investigations both in the U.K. and U.S.

“In 2011 I made the decision to attend Otero Police Academy. After graduating I started my law enforcement career in Campo, Colorado before securing a position at Prowers County Sheriff’s Department, working within their investigations team.

Whilst working between 20 and 30 hours a week as an unpaid deputy at the Baca County Sheriff’s Office from 2014 until I accepted the courtroom security position in 2016 I came across and experienced many flaws within the department which disturbed me, but was not allowed to correct.

“Finally, it got to the point I could no longer morally or ethically live with myself or hold my head up in public, hence my resigning.

“I have over 10,000 hours of training and patrol and investigations (DOCUMENTED). One of my passions is continued education and learning. I continue to keep up with trainings, not only academically but physically as well”.

Good luck to Colin. We will follow his election with interest and report back.

One Response to "Tilbury man is standing for Sheriff!"