Thurrock hosted a strong East London XI on Saturday morning and maintained their unbeaten run in the league. A cagey opening 10 minutes saw East London dominate possession and create a couple of half chances. However, a quick clearance from Tommy Ing out of defence saw Thurrock break quickly and Callum Harvey finished off the move. Thurrock were quickly 2 up after an error from the East London defence gave Steven Abbott a chance to score from the top of the D, however the keeper made a great stop from the initial shot only for Abbott to score with the rebound.

Thurrock began to find their flowing passing game in the 2nd half, but struggled in front of goal, both Darren Clark and Tony Cashman coming close to scoring. Liam Ross finally found a way through for Thurrock’s 3rd and Steven Abbott claimed his 2nd of the game and 14th of the season to make it 4-0. East London scored a consolation goal late in the game after a classy reverse hit shot beat Andy Gaut in goal. Man of the match was Max Blake again after another solid performance in Thurrock’s defence. 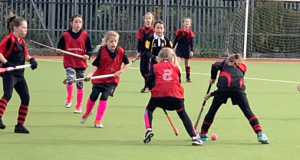 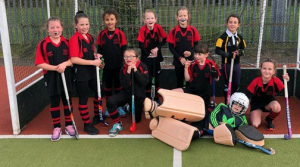 As before, Thurrock join forces with Havering Hockey Club and all the teams played exceptionally well throughout the day, with good results across all age groups against a variety of teams across Essex.

U10 Girls – Drew 1, Lost 3; Eloise Naylor was outstanding as Thurrock’s only player in this category.

U12 Girls – Lost 1, Drew 3; Great performances from Sienna Clark, Libby Mager and Amelia Daniel including a draw against a very strong Old Loughtonians side.

U12 Boys – Won 1, Lost 3; with one defeat coming is the last seconds of the game. Cameron Raisbury, Aston Broadbent and Nathan Steel were outstanding.

In this East Division 8SE game, Thurrock’s team contained two father and sons and a pair of twins but from the first whistle, it was the home that side went on the attack and only strong defensive work by Hayden Keeler Stone and Max Blake marshalled by Tom Archer kept them at bay. Thurrock were penned in their own half making few attacks from Darren and Ben Clark. After a sustained attack , Wapping eventually went into the lead and although showing promise Thurrock were unable to equalise by half time.

With the sun behind them in the second half, Thurrock slowly began to gain the upper hand and gained a penalty corner which produced the equaliser for Tony Cashman. This inspired Thurrock into even greater action and slick passing between Jay and Jake Lamb moved the ball through the Wapping midfield and set up a shot for Darren Clark.

Although the keeper saved it, Nathan Cashman was on hand to flick into the net to put Thurrock into the lead. Wapping were spurred into action and a series of accurate passes led to Thurrock’s defence being pressurised forcing keeper Ryan Jones to produce some essential saves to maintain the lead.

Thurrock again regained control and a defence splitting pass by Tony Cashman allowed Dudley McNamara to slip the ball past the advancing keeper. In the final seconds, Thurrock were awarded a penalty corner but despite heavy pressure, Wapping were able to scramble the ball clear to prevent further score.

Once again, Thurrock had to come from behind to preserve their unbeaten run this season and in the process maintain their place at the top of the league. They knew Romford would be tough opponents as they arrived at Palmers also unbeaten this season. Both teams showed their attacking intent in the first half with Thurrock looking to play through the midfield to their attackers and in contrast Romford always looking for the early ball to set their forwards on a quick counter-attack. These attacks were well thwarted by the Tees defence of Laura Fishleigh, Natalie Kerin and Katy Martin and goalkeeper Alison Hadley who was in inspired form. The score-line at half time was goalless, and the second half mirrored the first with the contrasting styles of play.

Thurrock had some good chances to score including a great turn and shot from Alison Bonner which the Romford goalkeeper did well to save, and a goalmouth scramble from a Fay Tuffee shot after a penalty corner where the ball looked to have crossed the line. With six minutes remaining, the game looked set for a 0-0 draw and both teams failing to score for the first time this season, but a Romford penalty corner was harshly awarded and then powerfully dispatched despite the gallant efforts of Kerin on the line.

With time running out, it looked like Thurrock were going to suffer their first defeat of the season, but the same never-say-die attitude which they have shown all season came to the fore once more and from a penalty corner of their own, the initial shot by Louise Pike was deflected by a defender into the path of Tuffee who swept the ball towards the goal where it was confidently finished at the far post by Jade Franklin.

Thurrock were delighted to earn a draw so late in the game and will look to return to winning ways when they travel to play Redbridge this Saturday. Player of the match was goalkeeper Hadley for making some high class and crucial saves throughout the match.

A remarkable performance from the entire Thurrock squad on Saturday saw the team walk away with a 2-3 win and 3 points!

Sitting at the top of the league table, Crostyx were determined to secure a home win against Thurrock to keep them sitting comfortably at the top of the table. Thurrock came out strong from the off with majority of the possession and caught Crostyx off guard with a fantastic strike from the top of the D by Gemma White. Making it 0-1 within the first 3 minutes! Following this superb start, Thurrock continued to battle working well as a team and fighting for every ball. Crostyx came back strong with a counter attack.

After a series of fantastic saves by Kelly Bentley, they snuck the ball into the corner making it 1-1 before half time. Thurrock started the second half strong and on came Thurrock’s super sub, Leah Purser. With a fantastic pass down the line from Joey Taylor, Leah took the ball into the D and placed it perfectly in the top left hand corner to make it 1-2!

With strong performances and multiple short corners for both teams meant this was an end-to-end game! Thurrock were awarded a short corner which was injected by Sally Ellis to Louise Parrott followed by an instinctive left slip to Natalie Beardwell who swept the ball into the left hand corner of the goal making it 1-3!

Crostyx weren’t going to make it easy for Thurrock and continued to put the pressure on throughout the second half and with only 5 minutes remaining Thurrock conceded a goal. Tee’s then played a tactical game of possession for the last 5 minutes to ensure Crostyx weren’t given the opportunity to make a break and equalise. The final result was a well-deserved 2-3 win to Thurrock with Gemma White being awarded Player of the Match. Thurrock are now sitting 1 point behind top spot on the table, with a game in hand. This week they are home to Upminster’s 2s.

Thurrock Ladies 3s had obviously decided that they quite liked the winning feeling and were determined to continue it on Saturday morning at Braintree. Braintree started really well and pressured Thurrock’s goal and were awarded several short corners but Thurrock’s defence of Tracey Martin, Chloe Brady and Jess Mager held firm. Thurrock started to string together some well worked attacks and their hard work paid off and Hannah Barcham scored her first goal of the season.

At half time, an amazing team talk from Tracey Martin saw Thurrock decide that they were giving Braintree far too much territory so they pushed up as a team. Chloe Oakley almost got on the end of a beautifully struck ball from Sally Taylor across the D and despite having broken her finger in the first half, Jacqui Simmonds put the ball past their keeper. Conceding this second goal spurred Braintree on and Thurrock found themselves defending again, the same as the first half. Braintree put the ball past goalkeeper Claire Brosnan but Thurrock managed to hold on and collect all 3 points. Girl of the game was Sally Taylor.