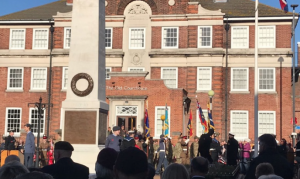 THURROCK residents from Stanford-le-Hope across to Aveley paid tribute to those who gave their life in World War One.

This year marked the centenary of the end of World War One. It happened to coincide with Remembrance Sunday.

Films courtesy of the Thurrock Independent.

We will be adding photographs and comments as they come in.

A large crowd at Grays watched civic dignitaries including Mayor Cllr Barbara Rice and Thurrock MP Jackie Doyle-Price lay wreaths. Much of the service took place in sunshine but as the parade marched off at the end the heavens opened.

MORE than 3,000 people packed into the Green in Stanford-le-Hope this morning for a service which saw the communities of Stanford, Corringham and Fobbing come together.

A beacon was lit in Purfleet as part of a whole host of events up and down the country.

EXCERPTS from this evening’s beacon-lighting event at Coalhouse Fort when the borough community came together to round off a day of commemoration.
From Sue Yates’s appreciation of a community effort to primary school children reading their poetry and young musicians leading a parade the evening encapsulated what community spirit is all about.

RESIDENTS in Chafford Hundred turned up in numbers to support the annual Remembrance Sunday afternoon service in Kershaw Close, named after an American Second World War pilot, 2ns Lt Samuel Kershaw, who crashed and died on the site while serving with the 55th Fighters Group of the US Army Air Force.

A parade was led by 106 Orsett Air Cadets and included many pupils from Warren Primary School and local scout and youth groups.

The service, which featured music from Spectrum Brass, was taken by the Rev Charlie Kosla.