House of Fraser at intu Lakeside to close 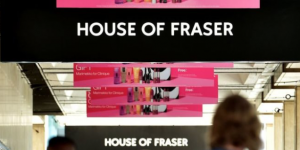 HOUSE of Fraser (HoF) is closing four more stores, all based in major shopping centres.

The department store chain, bought out of administration in August by Mike Ashley’s Sports Direct, will shut its Lakeside, Metrocentre, Norwich and Nottingham outlets in the New Year.

Mr Ashley said the landlord, Intu Properties, had been unwilling to reduce rents for the ailing shops.

He added that there had been “multiple meetings with Intu”.

“We were no further forward after 14 weeks. Unfortunately, these stores now face closing in the New Year. I urge other institutional landlords to be more proactive to help save the HoF stores in their schemes,” he said.

Intu confirmed it had been unable to reach an agreement with Mr Ashley.

“House of Fraser stores in our portfolio will be closing in early 2019, representing around 1% of our secured rent and 526,000 sq ft of retail space.

“We are enthusiastic about the opportunity to re-engineer and re-let this underperforming space to new and exciting alternatives.”

13 Responses to "House of Fraser at intu Lakeside to close"