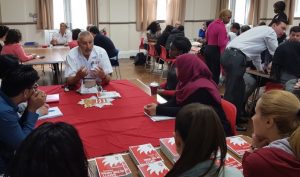 ACTIVE Essex has announced the shortlist for the 2018 Active Essex Sports Awards, which will celebrate sporting achievements from grass roots to professional level but only one sports organisation is represented, Thameside Primary school.

Basildon, Braintree, Harlow, Brentwood, Colchester and Southend all have sports awards but not Thurrock.

There are many many great sports organisations around the borough. It seems to be a shame that no-one is championing them.

The awards will recognise the individuals and organisations who have made outstanding contributions to sport and physical activity in Greater Essex and the finalists are now invited to attend a glittering ceremony at Chelmsford City Racecourse on Wednesday 5th December.

Commenting on the awards, Director of Active Essex Jason Fergus, said: “The Essex public have submitted hundreds of inspirational nominations to celebrate the achievements of local sports clubs, coaches, volunteers and talented athletes who all demonstrate the long-lasting impact sport can have on changing lives and communities. I would like to thank everybody who has made a nomination and congratulate the finalists.”

Essex residents are being urged to now cast their votes online for who they’d like to see crowned as winners of three public vote categories for Sports Personality of the Year, Disabled Sports Personality of the Year and Unsung Hero. The Unsung Hero award recognises volunteers who have made outstanding contributions to local sport in their community.

Commenting on the final shortlist, Max Whitlock MBE, said: “It is such a great achievement to be recognised by your local community for your sporting achievements. I look forward to presenting the Young Sports Personality of the year award to an upcoming sports hero on the night and encourage everybody to cast your votes in the public vote categories.”

Votes for all categories can be cast at https://www.activeessex.org/public-vote-sports-awards-2018/ and voting closes on Sunday , November 18th.

Active Essex, the County Sports Partnership, aims to increase the levels of participation in physical activity and sport and its mission is to change 1 million lives by getting Essex active.

Freya Levy (Rochford, rugby) – Freya currently represents the UK and England in Rugby 7’s and scored her first international try on her debut game in France in April.

Adrian Marsh (Uttlesford) – Adrian is the current chairman of Plantation Youth Football Team and he has been involved in the club since it was formed in 1983.

Nicola Arnold (Harlow) – Nicola has been involved with the Harlow Penguins swimming club for over 35 years, originally joining as a swimmer herself.

Richard Kheder (Chelmsford) – Richard is a black belt in karate and a qualified referee, and has supported his club for over 35 years.

Active Workplace of the Year, sponsored by Essex County Council

This award is for an employee or employer who has been the driving force in getting colleagues within their organisation active. The employee/ employer has implemented innovative ideas to change the workplace sedentary behaviour culture by creating an environment that actively encourages physical activity within the working day and embeds an ethos of health and wellbeing among staff.

Changing Lives through Sport and Physical Activity, sponsored by Fusion

This award is for an organisation, group or individual who can demonstrate they have made a positive impact on people’s lives through a sport or physical activity project. For example by increasing participation, promoting stronger, safer communities or improving health and wellbeing.

Coach of the Year, sponsored by Everyone Active

This award is for someone who is committed to providing the highest standard of coaching to their athletes and/ or for helping other coaches to develop – someone who goes above and beyond.

Community Club of the Year, sponsored by Genesis PR

This award is for a local club that has significantly developed and/or performed well and developed in the last year at district, county, regional and international level.

Education Champion of the Year, sponsored by Jump Street

A School, college, university or early years setting that gives its pupils a wide range of opportunities to participate in high quality physical education and extra curriculum sport and that is helping young people to understand and embrace daily exercise for the benefit of their health and wellbeing. The institution should show a continued commitment to club links.

This award is for an individual or an organisation that has made a significant contribution in the last year to advancing sport and physical activity for people with disabilities.

Young Sports Personality of the Year, sponsored by Intelligent Health

This award is for a young athlete (under 18) who has made a significant impact over the last year at a regional, national or international level, either individually or as part of a team.

This award is for a young volunteer (under 18) who has made an outstanding contribution to local sport. It could be a dedicated volunteer within a sports club setting who deserves recognition for their commitment to supporting and developing the club and its members.