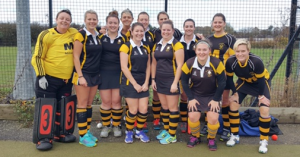 Thurrock maintained their position at the top of the league with another hard fought victory at Redbridge & Ilford. Tees began the match strongly and took the lead from a penalty corner when Fay Tuffee’s shot was deflected and fell perfectly for Alison Bonner to score with a reverse stick finish. Thurrock played some excellent attacking hockey during the rest of the half through Jade Franklin, Sasa Naidoo, Sarah Judd, Charlene Curtis, Becky McKenna, Tuffee and Bonner but despite several further opportunities found the opposition goalkeeper in fine form. Thurrock took this slender lead into the second half, but continued to produce some great attacking moves. Unfortunately, from their own penalty corner, Tees were caught on the break allowing Redbridge & Ilford to equalise. This goal spurred both teams on to further attacking and only some good saves by Thurrock keeper Alison Hadley kept the score at 1-1. The battling spirit that Tees have shown throughout the season came to the fore once more and from a long corner, Tuffee’s drive and cross into the circle just eluded Bonner but Curtis was there at the far post to calmly slot the ball home. Redbridge pushed forward again for a second equaliser but some great play by Laura Fishleigh to release Naidoo down the right hand side resulted in her cross being superbly finished by Curtis for her second of the game. Any further attacks by Redbridge were thwarted by the defence of Fishleigh, Natalie Kerin, Cheryl Broadbent and Hadley and the game finished with a 3-1 victory for Tees. Thurrock’s next game this weekend at Palmers will be a very tough challenge against Colne who are currently second behind Tees in the table.

Thurrock came out fighting after last week’s well-earned 3 points. They started as they meant to go on with lots of clever passing around the pitch. We had majority of ball possession and managed to convert this into a goal during the first half, scored by Natalie Beardwell. This gave Thurrock the extra boost they needed. Upminster had a few opportunities but were unable to capitalise on this with Emily Wynne, Sarah White and Sally Ellis keeping them at bay along with Kelly Bentley making some effortless saves. After a few stoppages during the game due to injuries, Thurrock still managed to defend strong against the Upminster side. The team talk at half time meant Thurrock were back to their usual form with Joey Taylor, Katie Lawrence, Gemma White and Louise Parrott working seamlessly through the middle and along the wing. A well planned penalty corner saw Natalie find the back of the goal for the second time during the second half. Another well-earned 3 points from a tricky game. Thurrock are at home this weekend against East London 4s.

Thurrock Ladies 3s knew they were going to have a tough afternoon taking on 2nd in the table East London 7s. They were already without Jacqui Simmonds as she was having last weeks damage operated on and then car trouble struck Abby Pollock leaving her waiting for the breakdown services, leaving them with just 10 players.

Thurrock started very well and the newly formed back line of Lucy Cowman, Jess Mager, Chloe Brady and Laura Nicola kept them out for a long time but eventually the extra player started to take it’s toll and East London scored. Another goal followed quickly behind it. Thurrock regrouped at half time and went back out knowing that, no matter what the score, they were playing very well. They started to string together a few attacks with the midfield Millie George, Charlotte Mailey, Chloe Oakley and Izzy Overy all pushing up in unison. Sophie Runcorn almost got on the end of a lovely ball sent across the D from Chloe Brady but the score stayed at 0. East London paid Thurrock a great compliment when they said they didn’t realise they only had 10 players. Final score 0-7. Girl of the game was Lucy Cowman.

Thurrock started strongly in this East Division 8SE game forcing Knights to defend in numbers as midfielders Ben Clark, Ryan Jones, Regan Harvey and Robert Healy worked tirelessly to provide ammunition for the forwards. After 10 minutes, Thurrock were rewarded when Henry Hudson played a one-two with Matthew Fleming allowing the latter to hammer the ball into the net. Thurrock continued their domination and the rare attacks by the visitors were easily cut out by defenders Jay Lamb, and Hayden Keeler Stone, marshalled by Michael Fleming and the ball quickly recycled. The visitors were pulled around the pitch by slick passes from Thurrock and Matthew Fleming added to his score receiving an inch perfect ball for him to beat the advancing keeper.

Thurrock maintained their domination and Henry Hudson was unlucky to see his shot deflected inches wide by the outstretched foot of the keeper. In the second half, a change of formation by Knights strengthened their defence but Thurrock continued to dominate the game with Ryan Jones seeing his shot deflect out off the post. A rare attack by the visitors caught Thurrock pushing too high and allowed the forward to hammer the ball into the net.. This buoyed Knights and they began to dominate the game with some long accurate balls which Thurrock struggled to suppress and Knights soon scored the equalising goal with a shot which flew into the roof of the net. Thurrock suddenly found themselves behind from a short corner shot which crept inside the post. Thurrock rallied and gained a series of short corners but were unable to turn them into goals. A quickly taken hit out by Knights saw the ball quickly moved up the field and a goalmouth scramble produced a fourth goal. In the final seconds Knights were awarded a short corner and the ball was flicked at speed from the edge of the D into the roof of the net to give the centre forward his fourth and his team’s fifth goal.

Thurrock travelled to Crostyx on Saturday hoping to keep their 100% record going. Unfortunately, they came up against a strong and spirited Crostyx side, and it was a physical encounter played in a hail storm which put pressure on both teams to play fluent hockey. Thurrock took the lead midway through the first half when As Snell found space in the D to lift the ball over the keeper. Crostyx found an equaliser late on in the half after the ball ricocheted around the D before falling to a Crostyx forward who finished from close range. The second half saw the weather change for the worse and both teams struggled to cope. Thurrock got the breakthrough thanks to a superb reverse hit finish from Ricky Smith, which caught the Crostyx keeper by surprise. Thurrock were holding on and created a few half chances to extend their lead. However, their hopes of keeping the winning streak alive were undone when Crostyx scored a controversial equaliser late on to spoil Thurrock’s record.