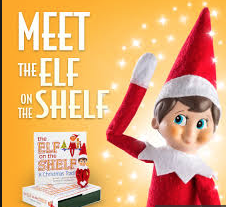 Celebrate the festive season and this much-loved Christmas tradition, with a fun-filled day, which all the family will love in the run-up to Christmas day.

After meeting The Elf on the Shelf® mascot, enjoy storytelling, colouring, games and capture memorable family selfies with the Scout Elf. What’s more, the first 50 customers who adopt The Elf on the Shelf®: A Christmas Tradition boxset will receive the holiday classic DVD An Elf’s Story.

The Elf on the Shelf®: A Christmas Tradition has captured the hearts of children everywhere, with millions of Scout Elves adopted. Every child, who has adopted one of Santa’s elves, knows the importance of Christmas magic and the two simple rules that come with having a Scout Elf. First, a Scout Elf cannot be touched; Christmas magic is very fragile and if a Scout Elf is touched it may lose its magic and be unable to fly back to the North Pole. Second, a Scout Elf cannot speak or move while anyone in the house is awake. A Scout Elf’s job is to watch and listen.

Santa’s official Scout Elves join their families at the start of the Christmas festivities, creating memorable family moments up until Christmas Eve when they return to the North Pole with Santa – until next year!