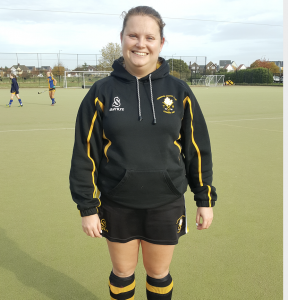 EMILY has been at the club for 4 years. She started in the 2XI and she now plays for the 1st team. In her second season at the club she was chosen as Ladies Club Captain and has since progressed to Club Secretary.

She is a level 2 coach and has helped to develop the coaching for both minis and seniors at the club. She is a Technical Official for England Hockey and officiates at National League fixtures and tournaments for England Hockey as well as at the Jaffa Indoor Finals at the Copper Box and the Youth Sports Trust School Games where she has been appointed as a Judge, Technical Official and Tournament Director.

At European level, she has officiated at the Junior Olympic Qualifiers in France, Club Championships in Gibraltar as well as officiated at International fixtures here in England as a Judge. She has also been involved in recruiting new technical officials by coaching at The Plum Tournament held at Lee Valley.

Alongside this she also umpires our club games when available. As a result of her officiating, she is sponsored by Grays Hockey. Emily quickly became involved in leadership roles on joining the club. She supports our club coaches especially when working with our younger members. She is a role model as her involvement in the game is an inspiration to our young players.