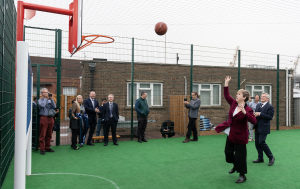 The new basketball court and recreation area for seafarers doubles as a football pitch at the centre, a 24-hour “safe haven” where port visitors can unwind, socialise and enjoy free wifi to contact their families back home. The newest facilities also include an outdoor table tennis table, seating area, water feature and gazebo.

A chaplain at the centre had the idea to add a basketball court to the Centre’s offering after visiting a docked ship at Tilbury called Gerda. He noticed the ship’s crew had erected a makeshift basketball hoop and net (to stop the ball dropping into the Thames) on one side of the vessel. It was then they realised the centre should build a permanent court.

Supporters for the development of the new facility were at Tilbury for the opening of the new facilities. They include the Merchant Navy Welfare Board, who donated £25,000, the Port of Tilbury who provided land adjacent to the centre for the basketball court, Seafarers UK, ITF Seafarers’ Trust, CSSS and the Port of London Authority. They were joined by the captain of the Gerda, which is on long term stay in port while a development project is completed.

Speaking at the event, Jackie Doyle Price said: “This is a story of inspiration and collaboration. The inspiration is in seeing what the seafarers needed; the collaboration was the key to how it was delivered. Assembling the funds for this development wasn’t simple; the key was the conviction this was the right thing to do, dogged determination and the centre’s strong track record delivering what seafarers need. You only have to see the pleasure that this facility gives port visitors, away from their ships for just a few hours, to know that it’s a tremendous asset.”

Alex Campbell, chief executive of Queen Victoria Seamen’s Rest, the charity that runs the Tilbury centre, headed up development of the basketball court, which was completed in a remarkable nine months.

“We’ve never done a project like this before,” he explained. “Seafarers sometimes spend more than nine months away from home, so this new facility provides a welcome opportunity for fun and exercise. We’re so grateful for the support of the partners who turned the vision for this facility into reality.”

The Port of London Authority (PLA) funded the permanent basketball hoops and goals. PLA corporate affairs director, Alistair Gale, said: “This Centre does tremendous work caring for seafarers from around the world when they are in port. These mariners play an essential, unseen role keeping us all supplied with the essentials that keep us all fed, warm and clothed; they’re also key in getting our exports to overseas markets. We’re really pleased to come together as part of the team that delivered this project, giving back to them for the work they do.”

Port of Tilbury asset & site director, Paul Dale concluded: “The Port of Tilbury has a proud record of giving back to its communities. We’re rightly proud that this centre is increasingly recognised as one of the best in the UK.”