THURROCK Council once again raised the flag to recognise and commemorate Transgender Day of Remembrance. 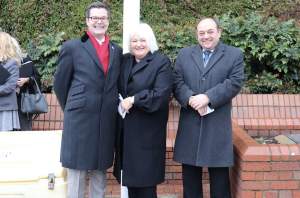 Members of the Lesbian, Gay, Bisexual and Transgender (LGBT+) Network were also in attendance at the event and this year are supporting the day with a special screening of the film A Fantastic Woman. The critically acclaimed film will be shown at Thameside Theatre on Wednesday 21 November, with doors opening at 7pm. Tickets are available to book online.

The international day, which occurs annually on 20 November, brings attention to the continued violence endured by the transgender community and honours those who have been victims of transphobia.

Cllr Rice said at the event, “Thurrock prides itself on being a varied and thriving community, and we must continue to recognise everyone who has been lost due to or affected by hate crimes, including those who are transgender.

“The LGBT+ community faces many challenges, but once again we raise the flag today to show that we support a warm and welcoming environment for people to be who they are, irrespective of their gender identity.

“Thank you to everyone who attended today’s ceremony and continues to show their support.”