Christmas lights switched on in Grays

A LARGE crowd swamped Grays High Street for an afternoon of fun and festivites as the town’s Christmas lights were switched on on Saturday. 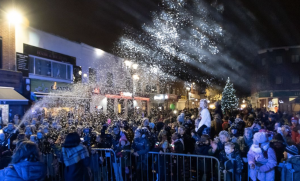 Borough Mayor Cllr Barbara Rice was joined on stage by members of the cast of this year’s Thameside Theatre pantomine, Aladdin, to throw the switch.

Before doing so she complemented residents on their community spirit and praised them for coming out in the cold to join in the fun. “Over recent weeks the community sporit shown in Thurrock has been recognised all over the county at events I have been to. I hope as many of you as possible will be going to see Aladdin. Thank you to everyone who has made this a loveley day.”

Prior to the switch on the crowd were entertained by performances from South Essex College musical theatre and dance students, Chafford Voices, an amalgamation of Thurrock Golden Voices, Creative Blast and the Thurrock Council staff choir, as well as Thameside Young Producers and lots more local talent.

Compere for the afternoon was Mark Dover of Time FM.

2 Responses to "Christmas lights switched on in Grays"