THE chance for residents to voice their concerns about the Lower Thames Crossing is set to be cut short due to demands from Highways England. 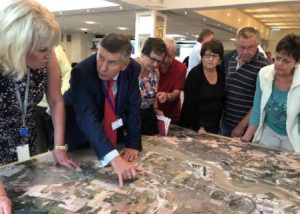 Thurrock Council has been forced to hold an extraordinary council meeting on December 11, nine days before the consultation was due to end because Highways England has told them that they want to see a report on the consultation responses by December 20.

Council leader Rob Gledhill said that they changed the date at the last minute after he was previously told that the response would not be needed until January.

He said: “Despite submitting a written request to Highways England to allow us to bring our final version of the consultation response to January full council for agreement, they are insisting that it is submitted on the day that the consultation closes to the public, Thursday, December 20.

“The project director for Highways England had initially told me in a meeting before statutory consultation began that the council’s response could be submitted and would be accepted after January Council. But yet again we saw Highways England change the goal post at the last minute.

“Couple this with the significant changes Highways England throw in at the last minute including little to no connectivity, admission it would be a motorway cutting the borough in half and ugly elevated sections further blighting the landscape, their awful plan went from bad to worse.

“This means that council officers have had even less time to review the thousands of pages of documentation included in the consultation before developing our council response, information they were only given after it had opened.”

Shortly after the consultation got underway in October, the chair of the council’s Lower Thames Crossing Task Force, Councillor Peter Smith, said: “I cannot emphasise enough how important it is that everyone in the borough takes the opportunity to have their say both by attending one of Highways England’s public information events and, most importantly, completing a feedback form either online or in paper form.”

At a full council meeting at the beginning of November, councillors unanimously backed a motion from Mr Gledhill that calls on the council to begin exploring legal action against the plans.

A Highways England spokesperson said: “We want to hear from as many people as possible about our latest plans for a new Lower Thames Crossing and out ten week consultation is significantly longer than the standard 28 days laid out in the planning act.

“We are also hosting 60 public events across the region more than a quarter in Thurrock. We are in constant contact with Thurrock Council and meet weekly with them we will continue to work closely with the council to develop the best possible project for local residents and businesses, as well as wider region.”