By Staff Reporter on December 3, 20183 Comments 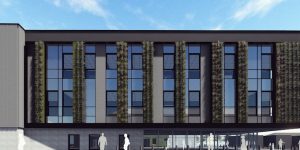 MEDICAL centres that will replace Orsett Hospital are not facing setbacks over affordability, a Thurrock Councillor has claimed.

Councillor James Halden, who oversees education and health in Thurrock, denied reports there is a “cost viability issue” with the four medical centres during a council meeting on Wednesday.

His comments were made after it was revealed in a Thurrock CCG report that the planned centre in Tilbury could be “scaled down” due to questions over finance and which services would be delivered there.

It also states: “The Purfleet IMC is in a similar position to the Tilbury site in that an agreement is still needed on the size of the site, the services to be delivered from it and whether or not it will be affordable. At the current time it is not clear who will develop the site.”

It concludes that until decisions have been made it will be “very difficult to progress the programme further”.

The closure of Orsett Hospital and the construction of four medical centres in its place is part of a wider plan to transform healthcare across mid and south Essex.

Cllr Halden blamed any delays to the medical centres on the council’s Health and Wellbeing Overview and Scrutiny Committee’s decision to request the secretary of state reviews the plans.

A final decision on this will not be made until December 5 and the CCG report makes no mention of the potential referral being the cause of the problems.

He said: “I know concerns have been expressed regarding reports there is a cost viability issue with the medical centres, this is not the case.

“There is a statement of fact to be made that because of the call-in of the decision of the STP regarding Orsett Hospital we cannot properly go through the process of saying how much revenue will go to each medical centre to repay the cost of borrowing.

“We can’t predicate the decision on services decanting from Orsett into the medical centres because that decision is paused. This is an unwelcome pause but not a show stopper and I would say for members of the public who are expecting us to deliver £70million of new health estate it is very disappointing that the decision about Orsett was published in June and it has taken until December 5 to call it in.”

Speaking after the meeting, Councillor Victoria Holloway, chair of the health scrutiny committee said: “We want positive health in Thurrock and we want it closer to homes but we need to make sure that is what people are getting. We have to look at the worst-case scenario which is that we don’t get all four centres, through no fault of anybodys, and some services move out somewhere while Orsett is left half closed. What happens if the half-closed hospital must then close. We need reassurance that every eventuality has been looked at.

“It has also been important that we are not too hasty with making a decision about a referral. There are procedures that need to be followed and within the time constraints we have been reasonable. We were always clear that this was going to be an option.”