Appeal after spaniel puppy hit by car in Orsett 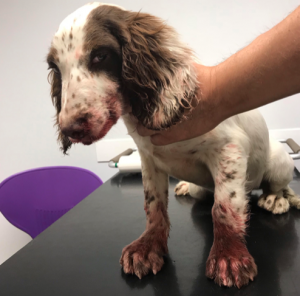 THE RSPCA is appealing for information after rescuing a five-month-old springer spaniel puppy believed to have been hit by a car in Orsett.

The puppy, now named Cassian, was found with injuries to his face and his upper jaw is broken in half from the accident, he also has fleas and is not microchipped.

A member of the public found the very poorly pup down a back road in Orsett on Wednesday evening (December 5), but was unsure of the exact location.

RSPCA inspector Jemima Cooper is now investigating to try and find out what happened to the puppy.

She said: “Poor Cassian is still very young puppy and was in a bad state when I collected him. He was covered in blood with injuries to his face and a broken jaw which will require an operation to fix. He is now receiving vet treatment to bring down his temperature and strong pain relief to keep him comfortable. He is in a bad way poor little guy.

“We are appealing to anyone who may have information about what happened to this poor dog to get in touch with us, or anyone who recognises him, to contact us on the inspectorate appeal line on 0300 123 8018.

“At this stage, we do not know if the puppy is owned and was lost when he was hit by a vehicle, or whether the pup has been abandoned. It’s been a rough couple of days for him either way and we are keen to find out what happened.”

Legally, it is a requirement to report to the police if you hit a dog with your vehicle. The RSPCA would always advise motorists to stop and help an animal if they have hit them their vehicle, and if it is safe to do so.

To help the RSPCA continue rescuing, rehabilitating and rehoming animals in desperate need of care please visit our website.