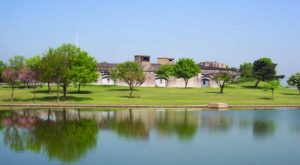 A HISTORIC riverside fort has received a big boost after being awarded £47,000 from the Government’s Coastal Revival Fund.

Coalhouse Fort in East Tilbury, which was built during the 19th century to help protect the Thames estuary, was one of 25 coastal projects to benefit from the latest round of funding.

The money, which is being topped up by Thurrock Council, will enable a full condition survey to be carried out on the derelict Second World War radar tower on the East Tilbury foreshore, the installation of five new information boards and a comprehensive business plan for the fort and surrounding park.

The council leases the fort to the Coalhouse Fort Project and it is run by a team of hardworking volunteers. It is open on the last Sunday of every month between March and November, as well as hosting various events throughout the year.

Cllr Deborah Huelin, portfolio holder for Communities, said: “Coalhouse Fort is a real jewel in the crown for East Tilbury, our riverfront in Thurrock and the borough’s heritage.

“With the visit of Benny the beluga whale and a recent Vogue photo shoot at the fort, visitor numbers have increased significantly of late and we want to maintain that momentum.

“The fort is of huge historical and ecological significance and this funding is certainly a massive boost. Together with our ongoing works to waterproof the fort and upgrade the electrics, it will go a long way in helping us ensure the fort is restored and maintained for future generations to enjoy.”

Coastal Communities Minister, Jake Berry MP said: “It’s fantastic to be able to kick start the restoration of 25 important sites up and down our Great British coastline. From Whitehaven to Weymouth, we’re saving some of the nation’s most cherished coastal heritage assets and landmarks from falling into disrepair.

“The Coastal Communities Fund also helps regenerate our coastal communities and support them to grow by bringing these sites back to life and making them the focal points of their communities once more.”

To find out more about Coalhouse Fort, please visit: www.thurrock.gov.uk/coalhousefort