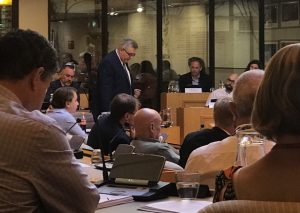 HOMELESS families are being forced out of London and placed in inadequate housing far from familiy and friends, Essex council leaders have warned.

A letter sent to senior politicians in the capital has been signed by every Essex council leader and urges London boroughs to stop placing homeless families in the county as a way of “removing a problem”.

The councils raise 11 issues including a lack of communication from London authorities which leaves them unaware of people being moved into the area, families being placed in inadequate housing, and the impact on local services.

It also warns of cases where families have been moved far away from support networks such as friends, family and jobs, which they say makes the situation worse.

Councillor John Lamb, leader of Southend Council, said: “We understand there are pressures on local authorities, especially in high cost areas and that it can make more economical sense for those families to be rehoused somewhere more affordable. However it cannot be to the detriment of those families, or the families who already live within Southend.

“London Boroughs should look after their own, rather than sending them to other boroughs who are suffering similar issues and as a county, we need to work more closely with the London Boroughs to tackle this problem.”

The letter has been signed by the leaders of all 12 district and borough councils, Essex County Council, Southend and Thurrock unitary authorities and the Police, Fire and Crime Commissioner.

It has been sent to the Mayor of London, as well as the leaders and directly elected mayors of each of the London Boroughs.

The leaders have also suggested ways to resolve the concerns raised and have invited politicians on both sides to work together to lobby the government.

The leader of Basildon Council, Councillor Andrew Baggott, said rehousing people should be done in the “right way”. He warned that if London boroughs do not communicate it is problematic to those who are being housed as well as for the teams who will are finding them accomodation.

“We of course recognise the difficulties all Local Authorities are facing in such a constrained financial environment, but we must work together more effectively to ensure everyone in Essex is given the opportunity to succeed and thrive with the appropriate support networks, schooling, and accommodation.