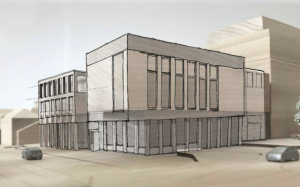 DAYS after council leaders agreed almost £10 million should be spent on new council offices the plans have been branded a “vanity project” with no clear business plan.

Members of the Cabinet backed the project last week saying they have ambitions to “build better than London” and have “iconic” buildings in the borough.

Council officers will now begin developing a planning application that asks for one half of the Civic Centre in Grays to be extended and the other half converted into 120 flats. The work is estimated to cost £9.78million.

Cabinet members backed the plan despite recommendations from a scrutiny committee that said a detailed business plan needs to be developed because it is unclear how residents will benefit from the scheme.

The chair of the Corporate Overview and Scrutiny Committee, Labour Councillor Oliver Gerrish, said: “This is being advanced without knowing what the benefit to residents will be. The report we saw at the scrutiny committee showed a relatively modest return on a large amount of spend and we wanted to see a business plan that shows what benefits there are. So far that has not been produced.”

The leader of the Thurrock Independents, Luke Spillman, also stressed the need for a business plan, saying the cabinet’s decision “looks awful”.

He said: “I’ve asked to have a meeting with the relevant director before Christmas because this went to a scrutiny committee where they made significant criticisms of the plan and then it has gone to cabinet and they’ve ignored what the scrutiny said.

“The council needs to show the business case for this. If they can show me the case that says we will get a £10million return or we’ll make savings, then I’ve not got a problem but what was put before committee was not a business case.

“This was always going to be controversial and it has to be dealt with properly. You can’t ignore the committee and push it through. This looks like a vanity project and there is no evidence to suggest otherwise.”

Both councillors added the existing civic offices do not have any major problems and are not in urgent need of redevelopment or repair.

Councillor Gary Collins, cabinet member for Thurrock’s central services, also highlighted at the beginning of December reasons why residents should no longer have to use the civic centre. He said almost half of residents now manage their council tax online, over half manage benefits online and all benefit claims are made online.

Thurrock Council did not respond to request for a comment.