Thousands of illegal cigarettes are taken off Thurrock’s streets

COUNTERFEIT and illegal cigarettes will not be tolerated in Thurrock warns Trading Standards after officers seized their largest single haul of more than 67,000 cigarettes.

The huge confiscation of fake and non-duty paid tobacco – which equates to 3,350 packs of 20 cigarettes – was the department’s biggest seizure from a shop in Thurrock to date and was found by tobacco sniffer dogs Bruiser, a four-year-old cocker beagle, and Mostyn, a two-year-old cocker springer. According to Trading Standards, illegal tobacco not only helps to fund organised crime within the borough, but also contains higher levels of substances including tar, nicotine and carbon monoxide, which can have serious implications on the health of Thurrock residents. 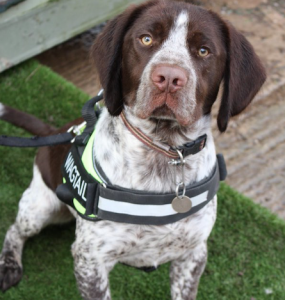 The seizure of more than 67,000 cigarettes is another example of Thurrock Trading Standards team working successfully with Wagtail UK Ltd in partnership with Public Health.

On 11 December, two Trading Standards officers and an officer from the Immigration Service visited nine shops around Grays and Tilbury with a dog handler and highly skilled sniffer dogs Bruiser and Mostyn. The inspection was one of six planned exercises checking a range of different businesses and areas in Thurrock since April as part of a clampdown on identifying black market tobacco being sold in the borough.

During inspections, officers explain the purpose of the visit and then used trained sniffer dogs to search for illegal tobacco, which is often hidden in unusual places.

Cllr Shane Hebb, Deputy Leader of Thurrock Council, said: “We know that illegal tobacco and cigarettes can have a serious detrimental effect on the health of residents within the borough, so I’m delighted that Trading Standards has pulled more than 67,000 cigarettes off the streets during this latest inspection.

“Sales of this type of tobacco don’t just harm legitimate business but are often associated with criminal gangs involved in major crime and steal hundreds of thousands of pounds in unpaid tax from public coffers.

“Public safety is our top priority and we will continue to work with residents and our partners in tracking down counterfeit and non-duty paid tobacco.”

If you suspect that you have been sold illegal tobacco, please contact Trading Standards on 03454 04 05 06.