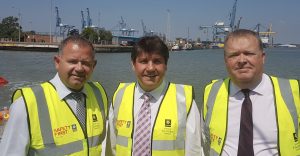 THE MP for South Basildon and East Thurrock, Stephen Metcalfe, rose on the floor of the House of Commons to make his feelings known on Brexit.

Mr Metcalfe said: “Whatever happens next, my right hon. Friend will agree that a second referendum would do nothing to move the debate forward and would create further division and confusion. We have had a people’s vote, so let us get on and prepare either to implement a heavily amended deal or no deal and to deliver Brexit on 29 March this year.

Stephen Barclay The Secretary of State for Exiting the European Union replied:

“My hon. Friend is right that we have had a vote, and I think his constituents want that vote to be respected, just as mine do. That is what the Government are committed to doing, but we should do so in a way that gives businesses and citizens the certainty that they need. That is what the Prime Minister’s deal offers, and I commend it to the House.