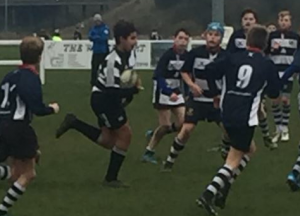 SUNDAY 6th January heralded a return to rugby action at Oakfield for Thurrock u13s versus Chelmsford after the Christmas break. Starting well, both Tees centres Joseph Reynolds and Albie Thomas tested the Chelmsford defence with some incisive running.

However, it was Chelmsford who were first to find their rhythm scoring four first half tries in the 7th, 12th, 17th and 25th minutes with scorers Lorcan (2), Nice (1) and Harvey (1) to make the score 20 -0 at the interval in the visitors favour. This made the half time Thurrock team talk by Coach Driscoll very interesting.

Zac De Breuk was introduced and quickly set about scoring Tees first try to make it 5 -20. This was followed up by another try for Joseph Reynolds and Thurrock u13s were back in the game 10-20. Whatever Coach Driscoll said at the interval, Tees forwards were really giving it some at the start of the second half as they matched Chelmsford up front.

Chelmsford made some tactical changes and started to move the ball out wide in the latter part of the second half and Jacob Macintosh, whose distribution at 10 was very good, going over for a try quickly followed by two further Chelmsford tries by starlet Kier Lorcan and probably the best try of the match was Chelmsford last when centre Hector Storey, after a great run, unselfishly delayed his pass to allow Owen Cleary in to finish the scoring for the day 40 – 10.

Chelmsford were the stronger team on the day, Tees however, had commendable efforts all round for their first outing in 2019.