MARC Robinson an Essex boy who has travelled the world portraying Buddy Holly, celebrating the man and his music and converting new generations to like Buddy Holly and rock n roll music, has been in hit after hit shows from ‘Rockin on Heavens Door’ ‘In Dreams’ A Legend Reborn’ Through the Decades with Roy Orbison and Buddy Holly’ he also plays Hank Williams in ‘Patsy Cline & Friends’.

In January 1959 Buddy Holly began a string of dates in the American Mid-West ‘The Winter Dance Party Tour’, this tour included Ritchie Valens, Big Bopper, Dion & The Belmont’s and of course Buddy Holly himself. 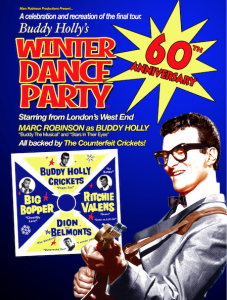 Sixty years on from what would prove to be Buddy Holly, Ritchie Valens, & Big Boppers last tour – Buddy Holly’s Winter Dance Party’s 60th Anniversary Show will celebrate the music of the three Icons of Rock n Roll along with Dion & The Belmont’s hits too.

From authentic attire, Buddy’s Stratocaster Guitar, the attention to detail will have you believing you are back in 1959 pure nostalgia a show to reignite memories of days gone by!

Also the talented musicians play authentically even reproducing the song ‘Not Fade Away’ on the cardboard box as it was done back in the studios when it was recorded.

So please come along to see and listen to the songs that set us on the path to pure rock n roll at its very best, from Buddy Holly’s excellent songs he wrote, to watching Ritchie Valens swing those Latino hips, the doo- wop sound of Dion, or the larger than life character of the big Bopper.

Will Rock n Roll ever Die? That’ll be the Day!

The show comes to Thurrock on January 31st.