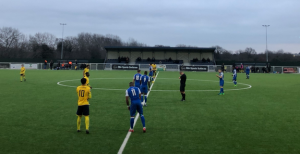 BLUES continued their habit of producing Jekyll and Hyde performances with a disappointing second half display against Witham Town allowing the visitors to snatch the three points after enduring periods of pressure in the first forty-five minute. The opening half saw Blues enjoy the lions share of possession but apart from a Kieran Bishop overhead kick created little else in front of goal. For Blues fans it’s difficult to understand why the half time break adversely affects their teams performance – today they only showed signs of urgency after going a goal behind. The defeat has put a severe dent in their playoff aspirations and with a run of difficult games to come any repeat of todays second half performance will see their chances of contesting promotion disappear into the ether.

A low key opening twenty minutes provided little to warm the sizeable crowd apart from an Adalberto Pinto cross which caused consternation in the Town defence, the ball sliding wide of the upright. In time Blues confidently took the game to Witham enjoying plenty of possession – Pinto, Zak Henry and Charlie Allen drove Blues forward – the patient build up was easy on the eye but lacked the killer ball to unlock a determined Town defence. Joao Carlos rampaging down the flanks created a chance for Bishop – improvising with an overhead kick forcing Finlay Shorten into a fingertip save to turn the ball behind.

Witham were failing to trouble the Blues goal in open play – their main threat came from free kicks and so it was when Luke Foster tested Clarke Bogard from distance the Blues keeper plunging to his right to make the save. A rare open break produced a worrying moment for the home defence when Johnny Ashman sent in a low cross which would only have needed a touch to open the scoring.

Blues continued to probe for an opening without success, but must have thought the pressure would eventually lead to a breakthrough in the second half.

The contrast in fortunes in the second period were stark, whatever team talks took place at half time, it seemed only Witham were listening to their manager, apart from an early chance when Ryan Mahal nodded wide it was the visitors who now held the upper hand.

Blues play so assured before the break became disjointed, the tempo dropped, the spark was missing, passes failed to reach their target allowing Witham to boss proceedings. They were quicker to the ball, winning vital tackles and for the first time putting Blues defenders under pressure.

Knowing Blues have not kept a clean sheet since mid September fans must have feared the worst – those fears were confirmed in the 66th minute and once again Blues Achilles heel conceding goals from set ball situations proved their downfall. Witham played in a corner, Blues defenders failed to attack the ball allowing the alert Kevin Coyle to put the ball past Bogard.

Stunned by the goal Blues at last stirred, realising unless they upped the tempo the game would slip away from them. Subs Dennis Oli, Aron Gordon and Ade Cole added impetus as Blues went in search of an equaliser. It was now Witham who came under increased pressure conceding corners and free kicks that Blues failed to take advantage of and once again it was poor delivery that let them down.

Kurt Smith could have put the result emphatically beyond Blues when a quick break cut through Blues midfield – the ball came to the striker just two yards out – somehow he screwed the ball wide of the far post.

Blues continued to push forward, Witham keeper Shorten was kept busy but not stretched, making comfortable saves to keep his goal intact. It was only in the dying minutes that Blues finally created a clear cut opening when Mahal crossed to the far post, where the ball found the head of the onrushing Michael Toner, who contrived to put his header over the bar from three yards.

That last miss summed up Blues afternoon, a first half that promised much and a second that fell far short of the standards they have set themselves, especially after a gritty and well earned draw the previous week at Maldon.

This coming Wednesday high flying Aveley are Blues opponents – they will have to be at their best to stop the Millers promotion charge. They have the ability of that there is no doubt, as long as they set out with the right mindset they are more than capable of getting something from the game.

Vote for your MOM on the fans forum