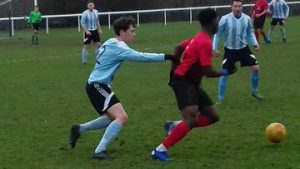 The top two clashed on Saturday, but for nearly an hour nothing separated Buckhurst Hill and Harold Wood Athletic. But the Premier Division leaders then unloaded three times inside nine second half minutes to take the spoils. Steve Townsend opened the account in the 57th minute, extended that lead in the 64th minute and then two minutes later Nathan Sollosi sealed the deal that sees Buckhurst Hill open a three point lead at the top of the table. Kelvedon Hatch move up to second after an Antony Aylett brace plus a Danny Gillard strike helped them beat Hutton 3-1. George Nash scored the Hutton reply and came off the subs bench in order to do it. Michael Moore and Gavin Cockman supplied the Bishop’s Stortford Swifts goals in their 2-1 away win at Springfield. Sungate shared a point with Rayleigh Town, but they were leading 2-0 at one point. Kieran Kelly and Jermaine Purchase had put Sungate in the driving seat, but Max Jones and Bailey Moss both hit the target in the final fifteen minutes to draw Rayleigh Town level. The 2-2 draw sees Sungate slip into the relegation zone as Great Baddow moved out of it as Dan Gage and Nav Arain scored the goals that saw them defeat Old Southendian 2-0. Manford Way may sit at the foot of the table but made it two wins on the bounce as they followed last Saturday’s 1-0 win over Catholic United with a similar 1-0 win at Canning Town: Ruben Carvalho scored the all-important goal this weekend for the relegation battlers.  Catholic United also eked out a 1-0 away win at local rivals Leigh Ramblers thanks to a Dan Trenkel goal.

Basildon Town came away from Snaresbrook with all the points as Alfie Phillips scored twice against the leaders: Brodie Horner his accomplice. Snaresbrook’s goal came via Ryan Barker-Francis but they remain top with a four point lead despite this setback. Shenfield AFC closed the gap with a 3-2 win over Galleywood. Mitch Day and Ben Carroll had given Shenfield the lead, but Galleywood were able to get back on level terms thanks to a Thomas Watling brace, but Sam Lock popped up to score the winner for Shenfield that helps their promotion quest. Ramsden Scotia remain third after a 3-0 away win at Frenford Res; Lewis Godbold, Kurt King and Steve Paoletti the marksmen. Charlie Heatley scored one of FC Hamlets’ goals in a 2-1 win over Rayleigh Town Res. The other was an own goal and the result keeps Rayleigh Town one place above the relegation zone. Old Chelmsfordians were at least able to claim a point from their game with Ongar Town. Martin Mixture and Paul Tiffen scoring the OC’s goals, while Peter Davies and Niki Love notched the Ongar efforts in the 2-2 draw. May & Baker E.C. Res. meanwhile shipped seven without reply at home to Herongate Athletic. Rayleigh Town Res. gifted FC Hamlets an own goal, with Charlie Heatley also on the FC Hamlets score sheet in the 2-1 success.

Nick Harvey scored a rocket for Toby on Saturday as they went on to re-take the leadership of Division Two; Paul Carr and Ross Dipple also notched in the 3-1 away win at Ryan. Runwell Sports are second and they too picked up an way win with the goals including one from debutant Joe Young. Charlie Adams and Scott Mortlock were their other scorers, while Harold Wood replied via Joe Pyne and an own goal. Beacon Hill Rovers beat Lakeside 2-0, while Chingford Athletic were the day’s big winners as they handed Rochford Town a 17-0 defeat. Eric Kelly lead the scoring charts with a double hat-trick; Alex Gordon contributed five of the goals; Louis Bollard also scored a hat-trick; with Harry Williams and Mickey Mesmin providing solos.

Westhamians extended their grip on the Division Three leadership as they are now seven points clear after a 2-1 win at White Ensign Res. Caiden Imbert-Thomas and Lewis Lawrence scored the goals, cancelling out the one Chadrack-Kisoka Domingo scored for White Ensign. Points deductions have cost Laindon Orient dear, they are now down in sixth but they had a big win on Saturday as they beat Old Chelmsfordians Res. 8-1. Sam Lake’s hat-trick was added to by a double from Jason Purewal with Jordan Williams, Jasper Read and Jamie Williams also scoring. Evan Mills supplied the OC’s consolation. Old Southendian Res. are up to second after they gained a point with Leigh Town. That local derby ended in a 1-1 draw with Sam Gilmore the Leigh scorer, with Jack Pagett scoring for Old Southendian who also had a player sent off. Francis Alinc scored both the Wakering Sports goals in a 2-1 win over Academy Soccer, with Alex Brown scoring their lone reply.